Paramount+, the rebranded CBS All Access streaming service from ViacomCBS, launched today. It got me thinking about this photograph. Are you familiar with it? 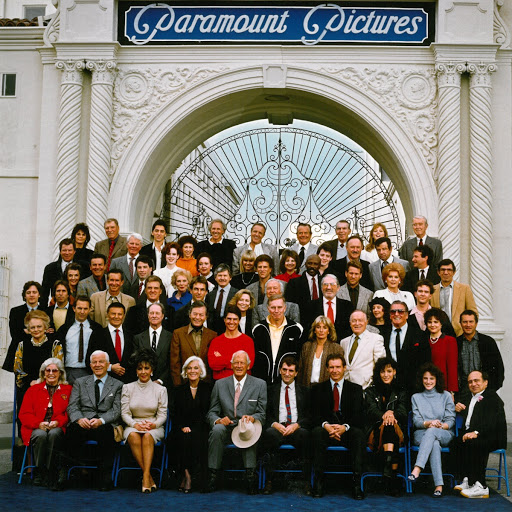 If you aren't, perhaps you're wondering why Tom Cruise is standing next to Charlton Heston who is standing next to Penny Marshall who is standing to Bob Hope who is standing next to Victor Mature who is standing next to *squints* Elizabeth McGovern who is standing next to Robert De Niro. The whole photo is full of weird combinations like that - Shelley Long next to Jimmy Stewart, Molly Ringwald next to Dorothy Lamour, Gregory Peck next to Debra Winger. This photograph was taken in celebration of Paramount's 75th anniversary in 1987. But you're forgiven if you didn't guess that, because who looks at all these people and thinks immediately that what they all have in common was working for Paramount at one point? Certainly not I.
And therein lies the problem with Paramount+'s marketing strategy. Paramount, unlike Disney, does not have the kind of unified brand identity that you need to get people to automatically recognize it. Except Paramount+ isn't even using illustrious and glamorous movie stars to market the new service, but rather what they've cynically termed "brands".  You've probably seen the terrible ads - Gayle King hanging out with RuPaul, Dora the Explorer, and a Klingon. Huh? What does that tell us about what this streaming service is and how it is different from the others?
When I ranked all the streaming services a couple of months ago, I listed many problems CBS All Access needed to address if it wanted to compete with Netflix and HBO Max. It has not taken my advice. Paramount+ is just CBS All Access with a new (worse) name. There have been no changes, let alone improvements, to the interface. If there's additional library content, I haven't noticed it. It's the most disappointing launch for a new service because it's not a new service.
I must ask: why rebrand now? I'd understand if they had some Mandalorian-level show that they could launch with. But they don't. (They do, however, have a new Spongebob movie and a reunion of the cast of the first season of The Real World, if you're young enough to enjoy the former or old enough to enjoy the latter). Last week, the execs behind the service announced a slew of shows in development, including a reboot of Frasier and a bunch of shows based on Paramount movies. They also announced that linear channels a la Pluto will be coming to the service at some point (Remember, after ViacomCBS bought Pluto, they put Pluto's Tom Ryan in charge of all their streamers). But why didn't they wait until they had these selling points to launch this rebranding? There is no reason anyone who wasn't interested in CBS All Access would be interested in Paramount+ as it is now.
You'd have difficulty locating movies with just about any of these golden age stars from the 75th anniversary photos. Paramount's classic film library isn't being utilized at all. Also, they don't even have all of the Star Trek movies! How can they market themselves as the streaming home for the Star Trek universe when Hulu has just as many Star Trek shows and movies? It speaks to ViacomCBS's larger strategy, which is to get money where it can by making licensing deals with other streamers. They sold the streaming rights to Yellowstone to rival Peacock, which is why you won't find that hit show on Paramount+. That's a fine strategy, but they can't do that and also want a highly competitive streamer of their own. Streaming services need exclusive content to be competitive, both original and library. The fact that ViacomCBS hasn't equipped Paramount+ with significant amounts of either is laughable.
It's obvious that ViacomCBS isn't willing to write the kind of checks that Paramount+ would need to compete with Netflix in terms of producing new content. But why can't they spruce up the interface, or at least give us a watchlist? I mean, why even bother changing the name at all? They would have been better off focusing on growing the free, ad-supported Pluto and keeping CBS All Access' appeal niche. But, they went with Paramount+ instead. Let's see how this works out for them.
If you would like to see me talking some more about Paramount+, subscribe to my brand new YouTube channel!

By Timothy McManus January 02, 2017
The Ten Best TV Shows of 2016 Here are the best televisions of 2016: 10. Stranger Things (Netflix)  The Netflix series quickly became a pop culture phenomenon when it launched on the streaming site in July. Starring a fantastic Winona Ryder as the mother of a missing child, the series pays homage to numerous sci-fi films from the 1980s. Good writing, smart pacing, and a satisfying level of suspense makes Stranger Things a worthwhile binge whether you get the references or not.
1 comment
Read more