Let's take a look at this past week in television.

"State of Affairs" (NBC) - Despite being billed as combination action/political thriller, this new drama couldn't be more of a bore. The poorly-written show revolves around a CIA analyst who briefs the President on pressing issues. Even solid performances from Katharine Heigl and Alfre Woodard could not get me to care about these one-dimensional characters. The question on most viewer's minds by the end of Monday's episode: When does "The Blacklist" return?"

"Toy Story that Time Forgot" (ABC) - This new special comes after the success of "Toy Story of Terror", a genius Halloween special that aired last year. Woody, Buzz, and the gang are back in this new half hour, which revolves around a mysterious group of new toys. The half hour is packed with the mix of humor and heart that we all have come to expect from the Pixar franchise. The only shortcoming is that 22 minutes isn't nearly long enough to do justice to the story they lay out. But it's more than enough to keep fans happy until "Toy Story 4". 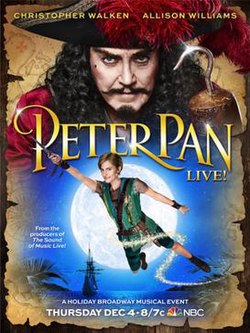 "Hot in Cleveland" (TVLand) - This delightful season six episode follows Joy, Bob (guest star Dave Foley), and Victoria scoping out a cheating husband, while Elka and Melanie participate in a "Password"-like bar competition. The humor is as sharp and meta as ever, the cast is stocked with pros, so why is this show getting cancelled?

"Peter Pan Live!" (NBC) - In this follow up to "The Sound of Music Live", Allison Williams plays the boy who never grew up, and Christopher Walken plays Captain Hook. The production value has tremendously improved since NBC's live musical telecast last year (which I very much enjoyed). Williams was surprisingly great, bringing her own spin to the character previously played by Mary Martin, Sandy Duncan, and Cathy Rigby. Walken's performance was ... bizarre, although his dancing was pretty good for man in his seventies. The supporting cast was smartly once again filled with Broadway vets like Christian Borle, and the always excellent Kelli O'Hara. Taylor Louderman makes for an impressive Wendy, Minnie Driver pops up at the end as adult Wendy, and a dog does an incredible job as Nana. I, for one, am looking forward more many more live musicals for the whole family to enjoy.

"How Murray Saved Christmas" (NBC) - This was a strange and borderline offensive animated special, featuring the voices of Jerry Stiller, Sean Hayes, and Jason Alexander. Never heard of it? Not surprised. I wish I could get that hour of my life back.