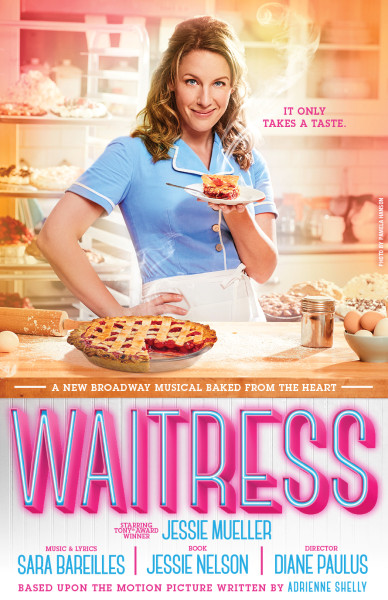 Waitress, the new musical opening April 24 at the Brooks Atkinson Theatre, depicts a woman's struggle to leave her abusive husband after she learns she's pregnant and starts an affair with her OBGYN.  While the story, based on Adrienne Shelley's 2007 film, doesn't exactly sound like the perfect musical comedy, the show works surprisingly well, especially considering how much I loathed the movie.

With its book by Jessie Nelson and music and lyrics by Sara Bareilles, Waitress isn't always sure what type of musical it wants to be. The setting, a roadside diner somewhere in the South, suggests a deep-fired, country-tinged show, while the young and racially diverse ensemble seem better suited for a modern show with pop songs, and the score incorporates both styles. The real through line of the piece is its message of female empowerment, represented by Jessie Mueller's Jenna, a waitress with a talent for baking pies, and her journey to self-actualization.


Mueller, who won a Tony two years ago for Beautiful: The Carole King Musical, is the main reason to see this show. She infuses every word with life, eliciting sympathy from the audience even when her character continues to make questionable choices. She also has real chemistry with Kimoko Glenn and Keala Settle, who play the diner's other two waitresses. Nick Cordero, who was great in Bullets Over Broadway a couple of seasons ago, is strong here as the husband, as is Drew Gehling as Dr. Pottamer, the OBGYN with whom Jenna has an affair. Christopher Fitzgerald gets laughs in his relatively minor role as the  love interest for Glenn's character. Veteran actor Dakin Matthews also makes the most of his short scenes as the owner of the diner.


The staging by Diane Paulus is competent but occasionally the attempts to make this a big Broadway musical gets in the way of what is essentially an intimate story. Lorin Latarro's choreography is at times far too busy. The audience cannot fully appreciate one of Bareilles' best songs, called "When He Sees Me" and sung by Glenn, because they are laughing at the sight of Glenn running around the stage. The song is about the character's innermost fears and having practically the entire cast on stage moving around with her is such an incongruous choice. The show is at its best when it's at its simplest, like the tender moment between Matthews and Mueller as he sings to her the lovely "Take It From an Old Man".

In the end, Waitress is much like a pie itself. A bittersweet concoction with an imperfect ratio of ingredients. Nevertheless, it's an entirely enjoyable evening at the theater, and marks Bareilles' impressive debut as a Broadway composer.