The pairing of Allied, an old-fashioned spy romance starring Brad Pitt and Marion Cotillard, and its director Robert Zemeckis, whose career of late has been consumed with technical gimmicks like motion capture, is somewhat odd. It should not have to take a director on the cutting edge of technology to make a film that presumably could have been made decades ago. But it is the aesthetic choices that make the film what it is; a sumptuous and dazzling throwback to an earlier era of storytelling.

Pitt plays Max Vatan, a Canadian intelligence office who arrives in Casablanca in 1942. He and Marianne Beausejour, played by Cotillard, must pose as a married couple as part of a plot  to assassinate a high-ranking Nazi. Inevitably, they fall in love and the action follows them to London, where they marry and have a child. The rest of the film follows what happens when Vatan's superiors give him reason to suspect his wife is really a German spy.

It takes movie stars to sell a premise like this, and luckily Pitt and Cotillard have the needed star power to pull it off. Cotillard is captivating. She blurs the lines between real and affected emotion with ease. We are never quite sure what to make of Marianne, and Cotillard takes full advantage of this as she wafts in and out scenes like a cat. Pitt is solid enough, but his lack of chemistry with Cotillard is unfortunate. Luckily, Cotillard carries the movie for the both of them. 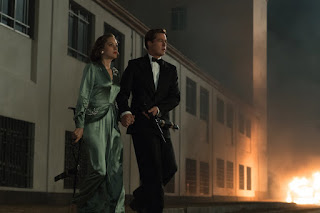 The sets and costumes are impeccable. More evocative of a 1940s movie than the actual 1940s, the lavish design elements contribute to the incredibly appealing visual look of the film, as does the gorgeous cinematography by Don Burgess. One particularly great scene: Max goes into a shop to confront the owner. Marianne and the baby wait in the car. Unable to see or hear what's going on inside, we see the terror slowly take over Marianne's face as she stares at the shop's closed door. It's heartstopping.

Allied is a war film that's not really about the war. The war is used mainly as the setting, the backdrop for a psychological thriller. This is particularly noticeable in the London-set section of the film, as Max and Marianne's wedding, the birth of their child, and a party at their Hampstead home are all interrupted by air raids. The approach is not at all subtle, but it gets the point across without having to spell it out in dialogue. The screenplay by Steven Knight allows plenty of time for the set-up, something most films today rush by. The Casablanca-set portion is also the most action-packed part of the film, which is a bit misleading, as the rest of the film operates on a much smaller scale. But it's vital that we see the spies in action; what attracted them to each other in first place. The ending feels both predictable and not entirely earned on paper, but Zemeckis stages it so beautifully that it almost doesn't matter.

The only Oscars Allied has any chance of being up for are in the below-the-line categories (Joanna Johnston's costumes could very well win, and the production design and sound could get nominated). But because this is not the type of film that normally gets nominated for Best Picture (that is, a stodgy, serious prestige drama), that does not make it any worse a film. I get the impression that many of the reviewers of Allied felt the Zemeckis, Pitt, and Cotillard should have instead used their talents to make a serious war drama, and gave the film a negative review because what they got is not what they wanted (See also: The Girl on the Train, another awesome movie maligned by critics for not being serious enough). Do not go see Allied expecting a prestige drama or an action movie. Go see it for what it is, a fun, unabashedly romantic, old-fashioned spy thriller.