"Mom", "The Ranch", and the Dawn of Dark Sitcoms

No multi-camera comedy series has won the Emmy for Outstanding Comedy Series since Everybody Loves Raymond in 2005. Although multi-camera was once the dominant format for television sitcoms, the acclaim and popularity of shows such as Arrested Development, The Office, 30 Rock, and Veep have heralded the rise of single-camera as the most celebrated form of TV comedy in the 21st century. One of the virtues of this format is the ease with which shows can add more dramatic elements without completely offsetting the tone. Shows such as Sex and the City, Scrubs, Nurse Jackie, Louie, and Transparent have all mixed comedy with more serious or darker plot lines and have been nominated for Outstanding Comedy Series for their efforts. For multiple reasons, a traditional multi-cam sitcom cannot simply attempt darker material and expect the same praise. Firstly, when every joke is followed by booming laughter, either from a laugh track or a studio audience, any plot that does not end with a punchline would make the show seem unfunny, and thus a failure. Secondly, although sitcoms of the '70s were able to explore darker themes quite often, the abundance of viewing options today relegates the multi-camera sitcom to a very specific type of offering: broad comedy. When there are so many shows out there on cable and on Netflix, network TV has to give the viewers what they want. And for most people, all they want from a sitcom is a laugh.

For the above reasons, people today think of single-camera comedies as the destination for smart, thought-provoking, and occasionally sad shows. Multi-camera comedies are thought to be the destination for mindless jokes. For evidence of this somewhat condescending generalization, look no further than the fact of the shows nominated for Outstanding Comedy Series at the Emmys in the past ten years, only 11% have been multi-camera. Although they are doing fine in the ratings (The Big Bang Theory is still the most watched comedy on TV), the message from critics and Emmy voters is quite clear: multi-camera sitcoms are entertainment for people without brains, not worthy of consideration. In this weird time where any show like this is automatically dismissed, a couple of shows have quietly popped up that prove the format is more than capable of handling dark material. 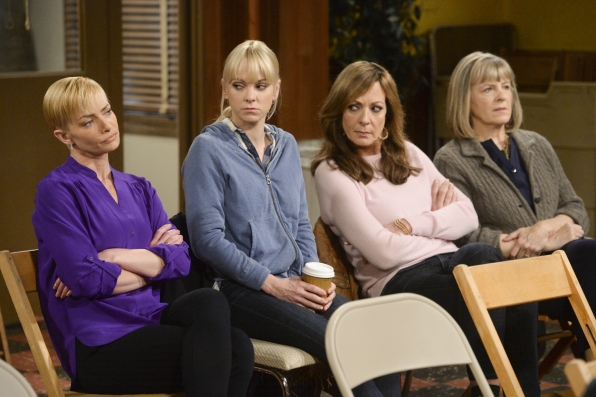 The first of these shows is Mom. Co-created by Chuck Lorre, ironic because he was a hero of the dumb-jokes-to-keep-people-watching formula that gave multi-camera sitcoms a bad name in the first place, Mom stars Anna Farris and Allison Janney as mother-daughter recovering alcoholics. That does not sound funny, but it is - or at least it can be. Mom walks the line between bawdy sex jokes and poignant moments. Alcoholism has always been treated with seriousness and respect on the show, as have other issues the show has delved into, including poverty, adoption, domestic violence, and death. These topics are, for the most part, ingrained in the plot, not one-off "very special episodes". Nearly every episode features an Alcoholics Anonymous meeting and most have to do with the continued challenges of a being an addict. Two major recurring characters have died over the course of the show's first three seasons. I cannot remember the last time a multi-camera sitcom chose to kill off characters for reason other than an actor's death. Its commitment to portraying recovery realistically is admirable, and its decision to package that depiction around a "dumb sitcom" serves to spare the show from becoming unwatchably depressing. The show compartmentalizes well, not every episode has a death or a relapse but when the show reverts the more humorous plots, it feels like filler, gearing up for the next big dark storyline. Mom has been embraced by Emmy voters in some categories, mostly for Janney, but the fact that it has been shut out of the top category feels like a pointed slight.

The next show I am going to discuss is Netflix's The Ranch. Starring Ashton Kutcher, Sam Elliott, and Debra Winger, The Ranch is about the son of a rancher who comes home to help the ranch through hard economic times. Resoundingly rejected by critics when it premiered last year, it's not a great show, but it is much better than critics gave it credit for. So rarely does a television show depict the struggles of ranchers from Colorado with any amount of seriousness. Usually people from rural Colorado or places like that are side characters who exist to be made fun of. But The Ranch does not make fun of its characters, it respect them. The dramatic moments here are not deaths, they are quieter, like the lingering resentment between a father and a son, the formal end to a marriage that ended long ago, the unmistakable aura of being disappointed with how your life turned out. The best storyline is the one about the economic troubles facing the ranch, and it's here where Elliott shows what a great actor he is. Tough decisions have to be made, and the consequences of those decisions are not erased at the start of each episode. But this is only part of the show, the other part is mainly cursing (it's Netflix so there is a lot of cursing), sex jokes, and beer drinking. These aspects are supposed to make the show funny, but they don't really achieve that goal. Both Mom and The Ranch featuring a lot of crude sex jokes makes me think there is some kind of link between that type of humor and the ability to successful add dramatic stakes to a sitcom. Perhaps the audience needs the familiar trappings of a "dumb sitcom" to be willing to invest enough time to see how the emotional stories play out. Or maybe that is just what the people who make the shows think is what the audience needs. Either way, these shows have created a unique sub-genre that will only grow as long as viewing options continue to grow. Next, Chuck Lorre and Netflix are teaming up for a new sitcom starring Kathy Bates. Not much is known about this show, but perhaps it will be in a similar vein. I hope networks and streaming sites continue to take chances with established formats. Not every show has to necessarily revolutionize television, but they should at least attempt to expand the scope of their genre.

The fourth season of Mom airs Thursdays on CBS.
The second season of The Ranch premieres on Netflix June 16th.
What do you think of this new trend? Let me know in the comments below!