The Mission: Impossible movies, based on the 1966-73 television series, are about Ethan Hunt and the Impossible Mission Force doing something that seems impossible at first, but always ends up being possible. Tom Cruise stars in all the films as Ethan, and other members of the team are Luther (Ving Rhames) and Benji (Simon Pegg). I like the Mission: Impossible movies because each film has a different director and thus each one has their own distinctive feel. Sure, there are a couple of constants (Cruise is in them all, they all are spy/action movies, and they all have people wearing masks - a nod to the TV show), but going into a Mission: Impossible movie you are never quite sure what you are going to get. Sometimes it's a silly fun spy franchise, other times it feels like nothing more than an excuse for Tom Cruise do to some sort of crazy stunt. Since the first film was released in 1996, there have been five movies, with a sixth on the way. Here's how I would rank the movies from worst to best. 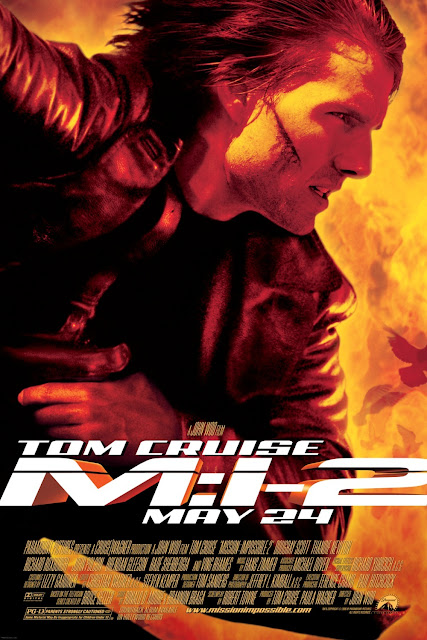 Directed by John Woo, Mission: Impossible 2 is one of the goofiest looking action movies I have ever seen. It managed to become the highest grossing movie of 2000, in spite of its nonsensical plot (about Ethan trying to track down a biological weapon) and laughable villain (played by Dougray Scott). The sequence where Ethan breaks into the lab is among the best scenes the series has ever done, but the rest of the action scenes are just not cool.  It owes more than a little to Notorious, but Woo can't create suspense like Hitchcock. Also all the scenes with Thandie Newton are just terrible. I didn't buy her character's relationship with Ethan at all. Definitely the low point for the franchise.

When it was released in 2011, Mission: Impossible - Ghost Protocol received the best reviews of the series up to that point, but I have no idea why. Sure, it's slick and fun, but there's no substance here. At least Mission: Impossible II gives us some idea of what motivates Ethan Hunt, but in Ghost Protocol he spends large spans of the movie miming instead of talking for no reason. It's beautifully filmed, well-executed air. And the best supporting character of the series, Luther, only gets a cameo in this one, meanwhile Ethan is aided by the entirely forgettable additions of Paula Patton and Jeremy Renner. The visual style of Rogue Nation is reminiscent of its immediate predecessor, but the story is more interesting than Ghost Protocol, seeing the IMF deal with government interference. Rebecca Ferguson as Ilsa Faust is a great addition to the team, but the whole proceedings just feel a little stale five movies in. The opera sequence is this movie's attempt to create something as memorable as the Vatican sequence from the third film, but it doesn't work as well it should. Not the best Mission: Impossible, but not the worst either.

The first one is the only movie that takes spycraft seriously as a plot element and not just an excuse for action. Directed by Brian De Palma, it has some of the best directed, most suspenseful set pieces of the franchise, including the breathtaking climax set on the TGV. It's also the best Tom Cruise vehicle, which is good because he is only member of the team not killed off in the first fifteen minutes. Dispensing with the ensemble nature of the TV show in favor of Cruise being the sole star was such a controversial decision, the movie bas blasted by cast members from the original series  Peter Graves refused to reprise his role as Jim Phelps after he learned the intentions for the character, and was replaced by Jon Voight. None of that bothered me, however, maybe because I have no particular attachment to the original series. I just think it's a great movie.

This ranking is not based on adherence to the source material. The original series made it a point not to delve into the personal lives of the characters, and Mission: Impossible III does exactly that. It finds Ethan retired from field work and married to Julia (played by Michelle Monaghan), but forced to go back to work and stop an arms dealer (played chillingly by Philip Seymour Hoffman). Mission: Impossible III just barely beats out the first one for the top spot on this list. The stakes feel real in this one, and the stuff with Ethan's personal life offers a refreshing change of pace. Hoffman is by far the best villain of the franchise, and it has my favorite IMF lineup, with Maggie Q and Jonathan Rhys Meyers fitting in nicely with Ethan and Luther. This is also the one that introduces Benji, a character that always works best in small doses. Directed by J.J. Abrams, Mission: Impossible III has the most fast-paced, technically flawless action scenes in the franchise, and it's one of the best action movies of the 21st century.

How would YOU rank the Mission: Impossible movies? Put your ranking in the comments below!