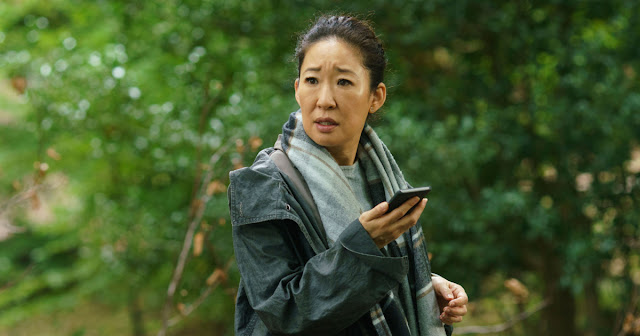 I wasn't planning on watching Escape at Dannemora, but I'm glad I did. We already knew that Ben Stiller was talented at directing more than just comedy (yes, I'm standing up for The Secret Life of Walter Mitty) and he certainly delivers with this 7+ hour miniseries about a 2015 prison break. The pace is deliberate, slow, and it's exactly what this kind of material needs. It features great performances by Benicio del Toro and Paul Dano as the inmates who escape and an unrecognizable Patricia Arquette as the woman who helps them.

Reality shows rarely make my top ten list, but when one becomes as much of an international sensation as Love Island, my interest is piqued. The fourth series of the British dating competition show managed to do just that by being an utterly insane exaggeration of every dating trope there is. Trash TV at its finest!

There are a lot of period sitcoms about families on TV right now. In fact, ABC airs three of them. But The Kids Are Alright has managed to distinguish itself in its early episodes by with its charming energy and surprising thoughtfulness. The cast is great and is anchored by the wonderful Mary McCormack.

Every teen soap cliché you can think is on display in Netflix's Élite, which is produced in Spain. But all of the cliches have been remixed and refreshed in a way that feels very 2018. It deals has the typical relationships plotlines of most teen dramas, but it also addresses class issues and prejudice, and there's also Big Little Lies-style flashforwards involving a murder investigation. It's a lot of fun! I recommend you check it out if you're into teen dramas and don't mind subtitles.

Oh, how saddened I was when NBC canceled Rise back in May! Despite only lasting ten episodes, it remains one of my favorite shows of the year. While it got off to a rocky start, the show found its groove a couple of episodes and it would have benefitted from additional seasons to explore these characters. There were some really nice performances and where else on television can you see show tunes sung by sullen teenagers?!? It was nice while it lasted.

Succession is not the show I thought it would be. I thought it would take the basic premise of a Dynasty and treat it with the seriousness of an HBO prestige drama. But it's not that. It's something of a black comedy about the lives of the incredibly wealthy. By the end of the first season, it's still not entirely clear where the creators are going with this, but it's been thrilling to watch.

Not since Twin Peaks has there been a TV show that so drips with the distinctive style of its director. Sam Esmail directs the heck out of Homecoming, which was written by Eli Horowitz and Micah Bloomberg based on their podcast. Each of its ten half-hour episodes is stuffed with visual trademarks such as overhead shots, split screens, and changing aspect ratios, but all that flair amazingly never distracts from the lean, efficient storytelling. Homecoming calls to mind Hitchcock not only in its camera angles but in the turns of its plot, a beguiling mystery about personal intention in the face of corrupted institutions. In her first series regular role, Julia Roberts delivers a fine performance (bad wig aside), and the sturdy supporting cast includes Bobby Cannavale, Shea Whigham, Stephan James, and my fave Sissy Spacek.

My dad has been a fan of Schitt's Creek since its start 4 years ago, which might have something to do with why it took me so long to give it a chance. But I'm so glad I finally did watch this hilarious, bizarre, sweet show. The wonderful cast is led by the always-funny Eugene Levy and the incomparable Catherine O'Hara. If you're not already a fan, check it out. Simply the best comedy on TV right now.

Anytime Phoebe Waller-Bridge has a new show, you can be sure I'll watch. But Killing Eve is so different from her other work, which is why it's high position on this list is somewhat unexpected. It's a spy drama about the brewing mutual obsession between an MI5 agent and the beautiful assassin she's hunting. Sandra Oh and Jodie Comer are the perfect stars for this show's unique mix of humor and intrigue.

I'm sure this comes as a surprise to nobody, but Sharp Objects was the best thing I saw on all of television last year. Jean-Marc Vallée's signature visual style turned out to be a great fit for this adaptation of Gillian Flynn's mystery novel. Intercutting flickering memories with the present day allows the audience to see how prior trauma informs so much of Camille's character and the town of Wind Gap. Amy Adams gives the best performance of her career (and she's given a lot of good ones!) as she reveals Camille's scars. The present is a consequence of the past, as we learn watching this audacious, artful slow-burn.

What were YOUR favorite TV shows of 2018? Put your lists in the comments below!