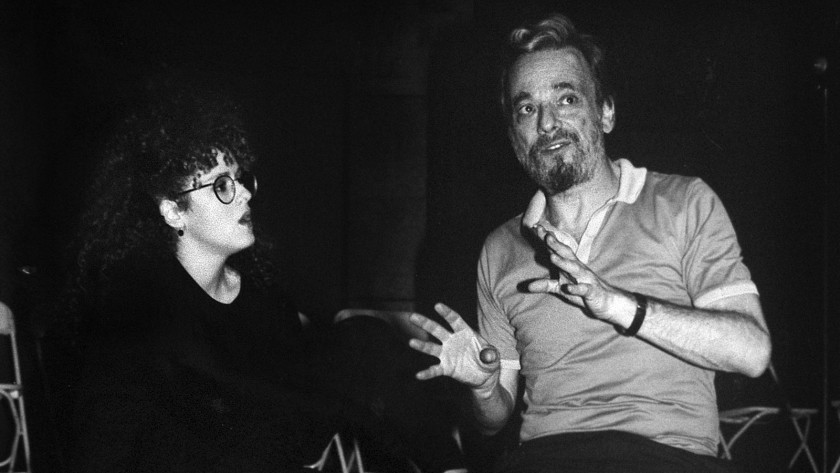 Today, March 22, is Stephen Sondheim's 90th birthday. In celebration, I thought I would rank the ten best songs with music and lyrics by the greatest musical theater composer there is.

Honorable mentions: "Send in the Clowns," "Not Getting Married," "Sooner or Later," "Loving You," "Ladies Who Lunch," "I Never Do Anything Twice," "The Glamorous Life,""Could I Leave You?," "Putting It Together," "A Weekend in the Country," "Isn't He Something?," "Finishing the Hat"

How much time can we hope that here will be?
Not much time, but it's time enough for me.
If there's time to look up and see
Sally standing at the door,
Sally moving to the bed,
Sally resting in my arms,
with your head against my head.

A beautiful, very sad duet from Follies, where two characters confess their long-held mutual attraction. By the end of the song it becomes all too clear that Ben was attracted to his memory of Sally and not the desperate, needy woman standing in front of him.

A bit of an unexpected choice for this list, since the musical it's from, Anyone Can Whistle, is not one of his best. But I'm a fan of this oddly hopeful goodbye song.

The act one closer from Sweeney Todd: The Demon Barber of Fleet Street is a prime example of how Sondheim's clever and intricate wordplay can be used to humorous effect. Morbid humor, in this case, as the song is about Mrs. Lovett and Sweeney Todd hatching a plan to kill people and then bake them into meat pies.

Must it all be either less or more
Either plain or grand?
Is it always "or"?
Is it never "and"?

Into the Woods is the perfect show to get little kids into Sondheim, but only fleetingly does it get at the kinds of complexities his best work lives in. This song, sung as the Baker's Wife considers her choices, is one of those moments.

One of the best things about this song, from A Little Night Music, is how random it is. It's the only solo for a minor character and it comes two-thirds through the second act, where the show's emotional climax should be. What, then, should we infer about its inclusion?  I don't know, but I know it's a good song!

Not a day goes by
Not a single day
But you're somewhere apart of my life
and it looks like you'll stay.

From one of Sondheim's most complex works, Merrily We Roll Along, is a beautiful, deceptively simple song about a certain kind of love.

It's a great New York song that is about the loneliness of modern life that underscores so much of Company.

This is our family, this is the lot.
After I go, this is all that you've got, honey.

Sunday in the Park with George has a lot of great songs, but this is the best. It's an incredibly poignant song about what we have and what we leave behind.

Make me confused.
Mock me with praise.
Let me be used.
Vary my days.

Long before Noah Baumbach and Adam Driver got to it, "Being Alive" was considered one of Sondheim's most profound, affecting songs. It analyzes and contextualizes the character and the show so thoroughly, that it almost feels too self-aware for the character who's singing it. But it's not, it's about a moment of realization that, whether or not change actually comes from it, irrevocably shakes your worldview.

Good times and bum times,
I've seen them all and my dear,
I'm still here.

Quite possibly the greatest song ever written, "I'm Still Here" is the story of an entertainer whose career has weathered many ups-and-downs, and it references several major events of twentieth century America, from the Great Depression to McCarthyism. The idea that you can take a person's life and take a list of things they've lived through, even the silly pop culture stuff, and find meaning in it is one that I've never really stopped thinking about since I first really paid attention to the lyrics. Like the best of Sondheim, it's music that gets into your soul.

What are YOUR favorite Sondheim songs? Let me know in the comments below! Thanks for reading!