"Muppets Now" on Disney+ Is Not The Disaster It Could've Been: Review 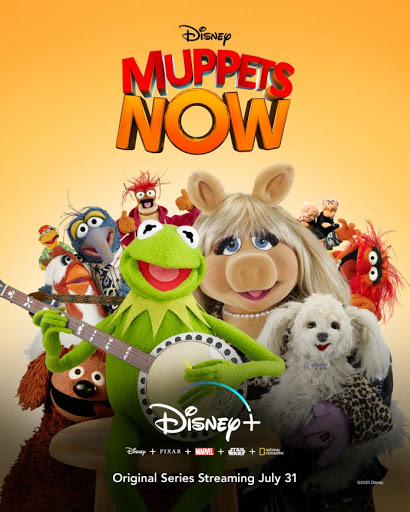 When Muppets Now was first announced, I thought the concept seemed safe, uninspired, too kiddie, and boring. The original idea, for the Muppets to star in short-form videos parodying Internet culture, seems to have been revised between now and then, since the videos have been stitched together into six half-hour episodes, the first of which premiered on Disney+ on July 31. Connective tissue between the segments appears to have been filmed after the pandemic started, or else I assume that's why Kermit and Scooter are videochatting each other. While it's nowhere the disaster I initially suspected it would be, I still thought it was a pretty uninspired use of everyone's favorite felt comedy troupe.
Because of the apparent change in direction, Muppets Now is considerably light on the kinds of backstage antics that were often the highlight of any given episode of The Muppet Show. The absence of that putting-on-a-show chaotic energy puts a lot of pressure on the sketches to be funny. And they are, mostly. Each segment takes the shape of a different genre of YouTube-style Internet content. Miss Piggy has a beauty vlog, the Swedish Chef does a cooking show, Kermit does celebrity interviews. It's amusing! It's nice to see so many of my favorite characters again - Walter! Uncle Deadly! But I don't know if YouTube is fertile ground for satirization, at least not by the Muppets. The show feels like it was written by someone whose perception of Youtube culture comes from reading about it in newspapers.
I'm also little concerned that the makers of this show might intend for some segments to carry educational value, sneaking in fast facts about science and cooking and photography into the comedy sketches. I really hope that aspect is dropped in future installments - aren't the bromidic life lessons Kermit is now seemingly required to impart enough? I mean, this isn't fucking Sesame Street.
Aside the Swedish Chef cooking one (which I found borderline tedious), the segments are funny and fast-paced and a perfectly fine distraction from the horrors of 2020. I look forward to watching the next episode, even if this iteration is far from my favorite project involving these characters. When Disney+ launched back in November, one of the first things I rewatched was the short-lived 2015 sitcom The Muppets. Was that show perfect? Absolutely not, but it took the Muppets to places they'd never been before. It attempted to grow the franchise by moving the characters in new directions and putting them in new situations. It was interesting, exciting, daring. It was everything Muppets Now is not.
I sincerely wonder if Disney would have been wiser to skip another half-hearted reboot attempt and just put the entire run of The Muppet Show on Disney+. The 120 episodes of that late '70s classic has never streamed and the final two seasons were never even released on DVD. Presumably, the cost of clearing the rights to all the music used on the show is the reason it is not already on Disney+ but, come on, Disney could definitely afford it. There are also a number of other series and specials starring the Muppets that are absent from the streaming service (though most of the movies are there), but The Muppet Show is the crown jewel of the Muppet franchise.
That reminds me, the debut episode of Muppets Now featured no musical numbers. It had guest stars (RuPaul, Linda Cardellini, Taye Diggs) but, unfortunately, none of them sang anything. That was a major disappointment. When I finished watching the episode, I felt compelled to go straight to YouTube and seek out a classic Muppet Show scene, Loretta Lynn singing "Oh, Lonesome Me" accompanied by a chorus of funny-looking dogs, among them Rowlf. That scene is so simple and yet so effective. If Disney refuses to let the Muppets do something bold and new, then they should at least let us go back and relive their former glory.