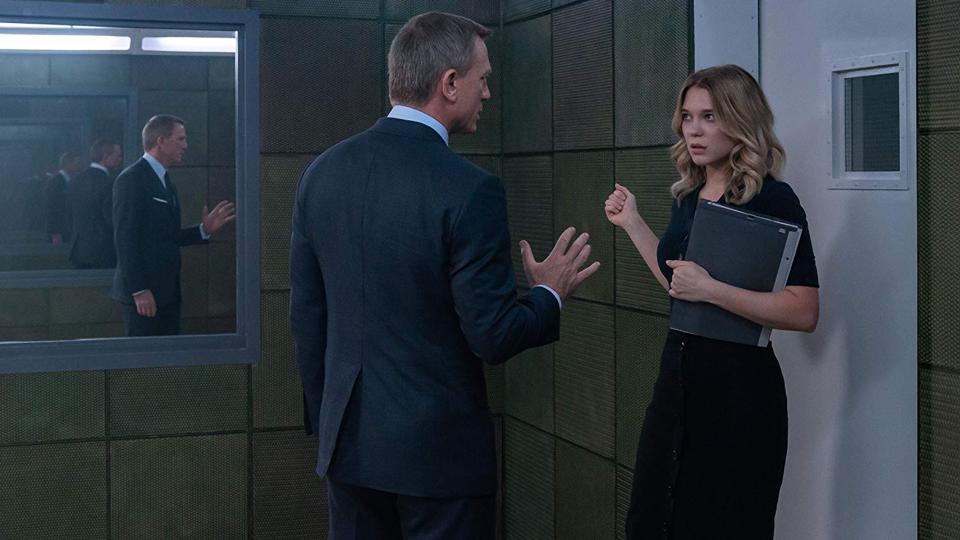 It seems impossible that a franchise 25 films in could still be having firsts, but the trailers for the upcoming James Bond film, No Time to Die, preview a big one. The shakeup to the patented Bond formula comes in the form of James Bond’s (Daniel Craig) love interest, Dr. Madeleine Swann (Lea Seydoux), who returns to the series after making her debut in 2015’s Spectre. The Bond girl is a staple of every film in the franchise, but never before has a Bond girl been a major character in more than one film. The No Time to Die trailers make it clear that Seydoux’s not coming back for a mere cameo, but rather Bond and Madeleine’s relationship provides the emotional momentum to the film’s story. This subtle but important innovation provides the decades-old franchise with a chance to change its historically poor reputation when it comes to female characters.

The fates of a Bond girl are typically revealed within a couple hours after her introduction. They either ride off into the sunset while canoodling with 007 or they tragically meet their end, joining the ranks of those Bond couldn’t save. But Madeleine Swann has never been a typical Bond girl. For starters, the names of Bond girls often include cheeky allusions to sex or parts of the female anatomy. But the writers of Spectre looked to decidedly more highbrow inspirations when it came to the naming Madeleine Swann, a single name containing two references to Proust.

Madeleine was introduced in Spectre as a psychiatrist and the daughter of Mr. White (Jesper Christensen), an adversary of Bond in Casino Royale and Quantum of Solace. The trailers for the new film indicate that she has a mysterious connection to the film’s villain, Safin (Rami Malek). Is he the man she alluded to in Spectre as having tried to kill her in her youth? Whatever the connection, Bond is clearly displeased with Madeleine’s secret keeping, as the trailer depicts a tense argument between the lovers in the midst of a car chase and later shows Bond’s surprise at Madeleine’s presence, implying some level of estrangement. And then there’s Billie Eilish’s title song, which contains such foreboding lyrics as, “I’d fallen for a lie, you were never on my side.” Was Madeleine the lie that Bond fell for?

Whether or not Madeleine turns to the dark side in No Time to Die, the investment in the character’s history and influence over Bond demonstrates an evolution in how the series treats its female characters. The stereotype of women in Bond films is that they are treated as little more than sex objects. While that’s often the case, the series has been trying to write more active roles for its leading ladies since at least 1977, when The Spy Who Loved Me featured Anya Amasova (Barbara Bach) as Bond’s KGB counterpart. But, until now, the series has never brought back a love interest in order to draw on, and perhaps upend, the romance of a preceding film.

Technically, the first Bond girl (not including Moneypenny or when M is played by a woman) to appear in multiple films was Sylvia Trench (Eunice Grayson), featured in the very first two Bond pictures, Dr. No and From Russia With Love. But Trench is a minor character, disappearing after an early amorous scene with Bond in each of those scenes. The producers originally planned to have Trench recur in five or six films, building up to one where she would be the leading lady, but those plans were scrapped and she was dropped from the franchise before the third film, Goldfinger, cemented the Bond formula as we know it today.

Since those early days, the series has avoided bringing back love interests for Bond, even when it would have made story sense to do so. The character of Paris Carver (Teri Hatcher) from Tomorrow Never Dies is established as Bond’s ex-girlfriend, whose history with Bond the spy uses to his advantage. Instead of inventing a brand new character, the filmmakers could have drawn on an existing character whose history with Bond was known to the audience, like Natalya Simonova (Izabella Scorupco) or Pam Bouvier (Carey Lowell). That they chose not to is emblematic of how the franchise has, until recently, consciously eschewed directly tying together multiple films as part of a larger story arc. Despite the presence of recurring characters like the MI6 staff and occasionally Felix Leiter, each film tells, more or less, a complete story. The stand-alone nature of the series accounts for why the Bond girls tend to vanish after the credits roll, even if the ending implied an ongoing romantic relationship. Ian Fleming’s novels, on which the film series was based, often provided a cursory explanation of how the affair fizzled out after a couple of months at the beginning of the next book in the series. But the films don't even do that.

The Craig films deviate from the classic Bond recipe by being interconnected. And while purists groan at the insistence on making every film a culmination of some kind, it seems odd that these efforts have not resulted in a returning Bond girl until now, Craig’s swan song to the role. Certainly Vesper’s (Eva Green) shadow looms large over this iteration of Bond, but even she did not make it out of her first film alive. With any luck, the Craig era’s willingness to experiment with the formula will provide Seydoux the opportunity to deepen the character of Madeleine and turn her into one of the franchise’s most well-written women yet.