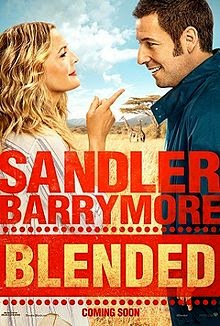 The Adam Sandler-Drew Barrymore film, "Blended", opened in theaters Friday. May 23. The comedy re-teams the pairing of Sandler and Barrymore, who had previously starred together in 1998's "The Wedding Singer", and 2004's "50 First Dates". Directed by Frank Coraci ("The Wedding Singer"), the stars play two single parents who after a horrible blind date, are forced to share an African vacation with each other's families.

Like "The Wedding Singer " and "50 First Dates", "Blended" is a romantic comedy. They do not even pretend that Sandler's Jim and Barrymore's Lauren aren't going to end up together in the end. While it's not the smartest or maybe even the funniest movie they've ever done, it's  a sweet enough premise. Most romantic comedies these days fail because of a lack of chemistry between the leads. Luckily, this is not a problem for 'Blended". Sandler and Barrymore have a genuine, comedic chemistry, and they play off of each very well. Sandler is stronger here than anything else he's done in the past couple of years. Barrymore is at the top of her game. The first movie she's done since the birth of her daughter Olive (her second daughter, Frankie, was born earlier this year), this is also one of the first films were she plays a mother. Maturity suits both performers.

The jokes start early and come often. Jim and Lauren's disastrous blind date provides some of the film's most hilarious moments. For those worrying that this film will be as disgusting as some recent Sandler projects, like "That's My Boy", be assured that besides a urination gag and some sexual innuendo, this is a relatively tame film. This is probably due to the focus on family. "Blended" is one of those romantic comedy fusion family adventure films, similar to 2011's "Just Go With It".

Where the film really suffers is the blatant laziness of the script. Some scenes, especially those set in Africa, have some really cheesy dialogue and easy jokes, which is a shame because the cast could have definitely handled some heavier material. The physical bits in this film are either hit or miss. There are CGI ostriches and hippos that were probably overkill, while others bits work really well with the story. And when did Drew Barrymore become such the physical comedienne?

The supporting cast is great. Kevin Nealon, Wendi McLendon-Covey, and  Joel McHale, have smaller parts, most of which were pretty funny, even if the served no other purpose but to get a laugh. The kids, mainly Bella Thorne, and some surprise cameos help the move the film along, but Sandler and Barrymore are the real attraction here.

In the end, the acting is strong, the heart is there, and most of the jokes work. "Blended" is overall very cute, and if you're willing to overlook some flaws, can be a very enjoyable experience for the whole family.