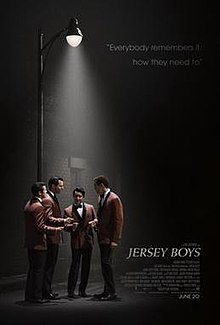 Clint Eastwood's latest film, "Jersey Boys" opened in theaters on June 14. The film is an adaptation of the Tony-winning musical from 2006, and tells the story of the Four Seasons. John Lloyd Young reprises his Tony-winning role as Frankie Valli, and much of the cast has also appeared in the Broadway production. Despite some major problems, "Jersey Boys" is a completely enjoyable film, especially at a time where the only alternatives at the movie theaters are sappy teen love stories and the twenty-eighth sequel to some superhero movie.

Rather than being a full-out theatrical musical, "Jersey Boys" is very much a dramatic film, that features musical performances only when they make sense with the plot, but not necessarily to further it. Those are the two different ways musicals are usually adapted into films. The first way has worked many times in recent memory ("Hairspray", "Mamma Mia"), but has failed as well ("Rock of Ages"). But the second way works better when there are darker aspects of the script ("Carmen Jones"), and I think fits "Jersey Boys" better. The only big musical number comes during the end credits, and is enjoyable, but definitely out of place. The hits like "Sherry" and "Walk Like a Man" come in when necessary, but don't take away from the plot.

The major problem with the film is the script's lack of focus. A wide range is covered, but at no points does the film slow down to explain and go into detail. The origin of the group is covered, but then their success is rushed past to get to how they fell apart, with an annoying lack of specificity about their money troubles. There is a poignant scene after Valli buries his estranged daughter, although their estrangement in the first place is another area left vague.

One of the things that the film gets right is casting. Every role is perfectly cast, and there isn't a weak link. Christopher Walken deserves a mention for his supporting role as a mafia boss Gyp Decarlo. Aside from the casting, the directing is another well-done component of the film. Eastwood is a pro, and has two Oscars to prove it, so their nothing about the direction to complain about.

Overall, "Jersey Boys" is a good film. There are some parts that definitely could have been cut out, but the bulk of the film is worth watching. Most of the movies coming out this summer are sequels or spin-offs or remakes or sequels, so "Jersey Boys" should provide a nice escape from "Transformers 10: Days of Future Spider Man Movies that are terrible, but will make hundreds of millions of dollars anyway."

By Timothy McManus January 07, 2021
2020 was an odd year for movies. Many of the ones scheduled to come out in 2020 were delayed due to movie theaters closures brought on by the pandemic. And many of the ones that did actually come out were released digitally. In 2019, I saw 44 films in a movie theater. In 2020, I saw only 11, all during the first two and a half months of the year. While watching movies at home on my laptop or TV is far from the ideal cinematic experience, I still saw a number of great films. Here are 10 of them.  10. I'm Your Woman  It took a few days after watching this crime drama, directed by Julia Hart, for me to really appreciate the sly magic it worked. Starring Rachel Brosnahan as the wife of a criminal in the 1970s who, after her husband goes missing, learns more about the criminal world in which he lived. It finds a unique perspective on a generic story and upends the tropes of the genre by focusing on the moments that would happen offscreen in a typical crime drama. Available to watch on P
Post a Comment
Read more

By Timothy McManus January 04, 2021
As I mentioned in my list of the ten best shows of 2020 , there was a lot of great TV this year. So, I've decided to list some of the best episodes of the year, to spotlight some shows that perhaps weren't strong enough overall to make the other list, but that had a really good episode.  10. "In the Belly of the Whale" ( Hunters episode one of season one, Prime Video) This show premiered back in February, which feels like a lifetime ago. But I liked it! It definitely won't be everyone's cup of tea, but you'd know whether or not it is by watching the 90-minute first episode, which is probably the high point of the series (it gets very twisty toward the end). Al Pacino is in it! 9. "Elizabeth, Margaret, and Larry" ( Curb Your Enthusiasm season ten episode eight, HBO) Curb Your Enthusiasm has done ten seasons in twenty years, and when the latest premiered, I thought it was stale and out-of-touch, a poor imitation of its former self. But the back
Post a Comment
Read more