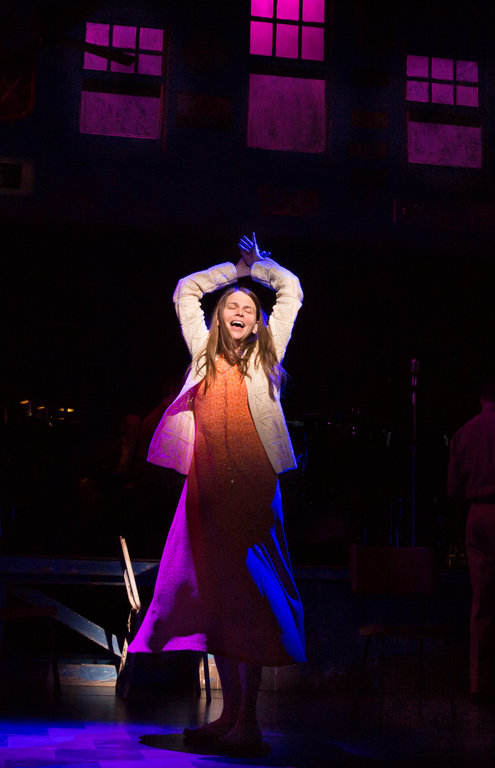 "Violet" opened on Broadway at the American Airlines Theater earlier this year. It is a revival of the Jeanine Tesori-Brian Crawley musical, which premiered off-Broadway in 1997, and is based off a one night only Encores! concert version done last summer. The plot revolves around a young woman, Violet, who has a scar across her face as the result of a horrific accident when she was young. She travels from North Carolina to Tulsa, Oklahoma to seek the healing powers of a televangelist. Two-time Tony winner Sutton Foster portrays the title role. A complete departure for the star, known for her energetic tap- dancing  performances in musicals like "Throughly Modern Millie," and "Anything Goes". In "Violet" however,  Foster does not dance, does not have a single costume change, and wears no makeup. Any concerns that leaving her comfort zone would hinder Foster's preformance are put to rest the moment this dazzling production begins.

Directed by Leigh Silverman, "Violet's" stripped down feel complements the story, set largely on a Greyhound bus, perfectly. The supporting cast also does a wonderful job at filling in Violet's world. Alexander Germignani and Emerson Steele portray Father and Young Violet, respectively, as scenes depicting her childhood before and after the accident are interspersed throughout the show. Both are excellent, as is Annie Golden, who plays an old busybody Violet meets on the bus. Also among the passengers, Monty (Colin Donnell) and Flick (Joshua Henry). This reunites Foster and Donnell, who also starred in the 2011 revival of "Anything Goes". But it's Henry, who as an African-American soldier in the South in 1964, who really shines in this Tony-nominated role.

Another highlight is the music. Tersori's score is filled with every from gospel to country to the blues. Standout songs include the jaunty 'On My Way', the expressively beautiful 'Lay Down Your Head', and the show-stopping 'Let It Sing'. This was the first time in a long time that I actually walked out of the theater actually humming the tunes.

If "Anything Goes" was a showcase for Foster's dancing, then "Violet" is a showcase for her acting. Perfectly comfortable with the darker material, Foster switches from optimistic to devastated, hopeful to hopeless in an instant. While the scar is not visible on her face, the pain is. Not only do you completely buy into the fact that she is Violet (as opposed to an actor playing Violet), there are moments when everyone sitting in the audience becomes Violet as well. The universal nature of the hurt Violet feels is expertly used to get the audience to care about this character, even when we shouldn't. Not only did she expect to have her scar removed, but to be made beautiful, with "Ingrid Bergman cheekbones", as if the Lord was some sort of magician. There are also parallels to "The Wizard of Oz", especially when Violet comes to realize the televangelist is nothing but a charlatan, and that she was placing all her faith in him, instead of God.

The biggest surprise from "Violet" comes near the end, where she is actually healed by God. No, her physicals wounds are not healed, but her emotional ones are. She is finally able to move past the accident, and fall in love. The journey is at times tough to watch, but extremely rewarding in its evocative and stirring portrayal of deeply scarred woman. Perhaps the most satisfying experience at the theater in the past couple years, "Violet" is not to be missed.

TimScale: 80/100
Now until August 10th at the American Airlines Theater