Reaction to the 2014 Primetime Emmys

My Reaction to the 2014 Primetime Emmys

The Emmys aired last night on NBC, hosted by Seth Meyers. Meyers did good job hosting the ceremony, no big stunts this year. His opening monologue did not contain too many insults directed at the attendees, but rather smartly written jokes about the current state of TV. Billy Eichner and Sofia Vergara also had hilarious bits during the broadcast.

Among the winners, they weren't as many surprises as last year. Ty Burrell won over last year's Supporting Actor in a Comedy, Tony Hale, which was his second prize. Alison Janney was this year's Supporting Actress in a Comedy, as was widely predicted. Her sixth win (and second this year) was for her portrayal of a recovering addict on CBS' "Mom". Lead Actor and Actress were Jim Parsons and Julia Louis Defryus, surprising no one. Best Comedy went to "Modern Family", which has now tied with "Frasier" for most consecutive wins, beating the heavily favored "Orange is the New Black", the most watched series on TV, "The Big Bang Theory", and the one which should've won, "Veep". 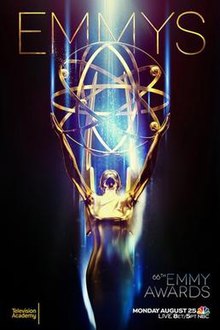 Among the drama winners, "Breaking Bad" won five awards. Not a shock, but at least this is the last year we'll have to deal with this annoying show. Juliana Margulies won for "The Good Wife", probably to make up for the series being snubbed for Best Drama.

For Miniseries/Movie, "Sherlock" surprised the world by picking up trophies for both Actor and Supporting Actor. For Supporting Actress, Alison Tolman was favored to win for "Fargo", but Kathy Bates ended up winning for "American Horror Story". I'm pretty sure everyone was surprised because even though Kathy Bates is a better actor than all the other of the night's winners, the academy has only given her one other prize, out of twelve (!) nominations. But everyone, including me, seemed to be overjoyed with the outcome. The same cannot  be said about Lead Actress. The honor, once again, went to Jessica Lange. That's right, Jessica Lange won again for "American Horror Story, this time for playing a witch! Heavily favored (and rightly so) to win was Cicely Tyson, for the Lifetime's adaptation of "The Trip to Bountiful", which won Tyson a Tony last year. The 80 year old veteran actress was then forced to sit there like an idiot pretending to be okay with the outcome. Maybe Lifetime's adaptation was too low-key for Emmy voters, and that's why she didn't win. Okay, but in that scenario, the winner would then be Minnie Driver, who gave a chilling performance in "Return to Zero". But no, Jessica Lange 's over-the-top evil witch is somehow more deserving. I understand that Lange has two Oscars and is a great actress, but honestly of her three Emmys, she only really deserved one of them (That was in 2012 for "AHS", her 2009 win belonged to "Grey Garden's" co-star Drew Barrymore, who had a much harder role). Best Mini went to "Fargo" and Best Movie to HBO's "The Normal Heart", neither a shock.

The "tribute" to Robin Williams was far too rushed together to be meaningful. They could have done a full out tribute package, although that would have caused controversy considering how Williams  died. In the end, he should have just been included in the In Memoriam segment like everyone else (Although at least it wasn't as downright offensive as last year's was).

Overall, the Emmys weren't particularly eventful, nor boring. On a related note,  it's time for the Television Academy to either up to the number of nominations for Comedy and Drama Series to ten, or spilt the categories into Network and Cable.