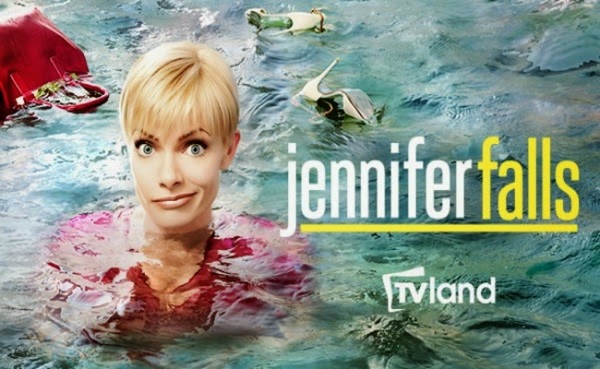 TV Land's "Jennifer Falls"concluded its ten episode first season on Wednesday, August 13. The series revolves around Jennifer Doyle, a single mother forced to move back home after being fired from her high paying job. When the show premiered back in June, there were some major problems, mainly unnecessary scenes with characters talking directly to the camera, and extra characters without any real purpose. But as the season progressed, those problems became less evident as the ensemble became more clearly defined.

The network's first single camera series, "Jennifer Falls" always had a distinctive tone that set it apart from TV Land's other original sitcoms. The lack of a studio audience works for this series, as the humor isn't laugh-out-loud hilarious, but rather you'll-still-be-chuckling-a-week-later funny. The jokes come from the characters the series has set up, from the controlling Jennifer, to her brother and new boss Wayne, to her wildcard best friend Dina.

Emmy winner Jaime Pressly stars as Jennifer, and shows a great comedic range, and manages to get the audience to love and hate Jennifer at the same time. The supporting cast is also solid, with standouts being Missi Pyle as Dina and Jessica Walter, as Jennifer's mother.

The writing is smart, but the majority of the episodes are identifiable and heartwarming. The scenes from the pilot showing Jennifer moving back gave a small town vibe. So when later episodes confirm the series is set in the greater Los Angeles area, that element is lost, which was somewhat disappointing.

If the series doesn't come back for a second season, the finale worked as a satisfying series finale (complete with a return appearance by the hilarious unemployment office workers from the pilot!). Overall, "Jennifer Falls" is not about accepting defeat, but rather accepting whatever life throws at you, and making the best of it. The series is leaps and bounds better than the cute, but very lazily written "Kirstie", which was recently cancelled by the network. Hopefully, the show will be given a chance to further develop the later episodes' charm.

By Timothy McManus July 24, 2017
The Mission: Impossible movies, based on the 1966-73 television series, are about Ethan Hunt and the Impossible Mission Force doing something that seems impossible at first, but always ends up being possible. Tom Cruise stars in all the films as Ethan, and other members of the team are Luther (Ving Rhames) and Benji (Simon Pegg). I like the Mission: Impossible movies because each film has a different director and thus each one has their own distinctive feel. Sure, there are a couple of constants (Cruise is in them all, they all are spy/action movies, and they all have people wearing masks - a nod to the TV show),  but going into a Mission: Impossible movie you are never quite sure what you are going to get.  Sometimes it's a silly fun spy franchise, other times it feels like nothing more than an excuse for Tom Cruise do to some sort of crazy stunt. Since the first film was released in 1996, there have been five movies, with a sixth on the way. Here's how I would rank the m
1 comment
Read more