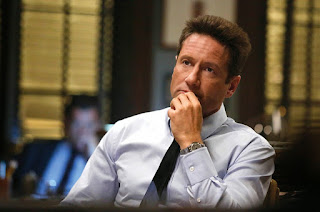 I watched the entire first season of Aquarius on Thursday, June 16 in anticipation of the commercial free season two premiere event that aired on NBC that night. While I normally do not like to go through shows that fast, it proved to be a fitting way to consume this imperfect but very compelling crime drama.

The series in set in Los Angeles in the late 1960s. David Duchovny stars as Detective Sam Kodiak, who at the start of the series is tasked with finding Emma Karn (Emma Dumont), a teenager who joins the Manson Family. The series follows two plot lines that occasionally intersect; Kodiak and his cases (which usually are tied to larger ideas like race or gender) and the exploits of the Manson Family in the years leading up to the infamous Tate-La Bianca murders of August 1969.

The goal of the show, I'm guessing, is to depict the cultural landscape that made it possible for someone like Charles Manson to wreak as much havoc as he did. If that the show's goal, it's only partly successful. While there is the multi-generational conflict that seemed to define the era by way of Brian Shafe (Grey Damon), the young undercover narcotics officer working with Kodiak, we only get to spend time with the police and the Family itself, so life outside of those two groups remains something of a mystery. 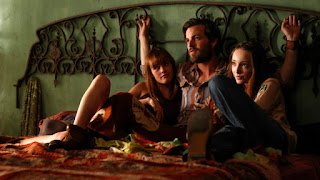 Duchovny is a strong anchor for the series, and the rest of cast is good as well. Gethin Anthony is interesting (if probably not all that historically accurate) as Charles Manson. Dumont (who you probably remember from Bunheads) is fun to watch as her character becomes increasingly comfortable with the hippie lifestyle. Emma's mother (also Kodiak's ex) is played Michaela McManus, who'd probably be better if her character had a storyline, or a personality for that matter. Emma's father, Ken (Brían F. O'Bryne) gets the series' least interesting subplot (Charlie was the pimp of the hooker that Ken's friend murdered, helped them cover it up, and now he and Ken are lovers or something like that). Claire Holt also appears as a policewoman who is pretty forgettable in the first season, but her storyline's change in direction at the start of the new season looks promising.

Be advised that Aquarius is historical fiction, emphasis on the fiction. It's not interested in getting every detail about Manson right. That's what books are for. Much of the fun comes from the audience knowing more than the characters do. In one scene, Susan Atkins (Ambyr Childers) is seen reading Rosemary's Baby, the film adaptation of which was directed by Roman Polanski, the husband of Sharon Tate. The first episode of season two begins with a flash-forward to the night of Tate's infamous murder but jumping ahead eighteen months in the narrative feels very unnecessary. Anyone watching already knows what's to come.

Aquarius is just one of several projects that have been made about the murders in the past couple of years. There was February's Lifetime movie Manson's Lost Girls, which starred MacKenzie Mauzy as Linda Kasabian, the Family member who later was a key witness for the prosecution in the Family's trial. It was a sleek, stylish movie, but the movie was too narrowly focused on Kasabian to really get a complete picture of the events. And then there was the 12 episode arc on the Manson Family from Karina Longworth's excellent podcast You Must Remember This, which tells the story with a Hollywood angle. That was truly a gripping, edge-of-you-seat listen.

The second season of Aquarius airs Thursdays on NBC.