Drew Barrymore Takes A Bite Out of Suburbia in the Hilariously Dark "Santa Clarita Diet": Review 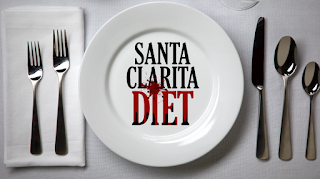 The less you know about the premise of the new Netflix comedy Santa Clarita Diet before you watch it, the better. You'll get a pretty good indication of whether you're going to like or not in the first fifteen minutes. Without revealing too much, Drew Barrymore and Timothy Olyphant play Sheila and Joel Hammond, married suburban realtors whose lives are irrevocably changed after Sheila develops an appetite for human flesh.

It's definitely not a show that is going to appeal to everyone. There are several gross-out moments and some of the jokes are really dark. But I found it to be hilarious. When trying to think of other shows that I could compare the tone of Diet to, I came up short. It's goofy and sharp and unlike anything else on TV. 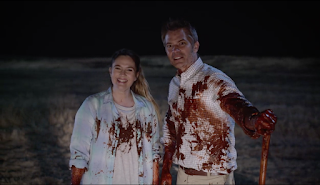 Santa Clarita Diet marks Barrymore's first starring on television since 2000 Malibu Road (a primetime soap produced by Aaron Spelling) was canceled after six episodes in 1992. Unlike her recent film appearances, where she has been a grounding presence, here Barrymore is clearly having fun. Her performance is big and zany, which is also a good way to describe the show. Olyphant has a much trickier role. He fares best when he's trying to match Barrymore's daffy spirit. Liv Hewson is great as Abby, the couple's teenage daughter. This is one of the rare shows where the side plots, mostly involved Abby's adventures with Eric (Skyler Gisondo), are as entertaining as the main ones.

Perhaps because the show try so hard to be unique and singular, not all of its aims are serviced equally.  It's part horror-comedy and part satirical look at self-betterment techniques in suburban culture. Unfortunately, the satire element becomes far less pronounced as the ten episodes go on. Some of my favorite jokes contrast the increasingly preposterous situations with commentary on the prosaic details of married life. More than anything these ten episodes are an indication that the show has a ton of potential to hopefully grow its world in future seasons. While it may not be for everyone, Santa Clarita Diet has such a specific brand of strangeness that must be admired.

Have you binged Santa Clarita Diet yet? Let me know what your thoughts are in the comments below!

By Timothy McManus July 24, 2017
The Mission: Impossible movies, based on the 1966-73 television series, are about Ethan Hunt and the Impossible Mission Force doing something that seems impossible at first, but always ends up being possible. Tom Cruise stars in all the films as Ethan, and other members of the team are Luther (Ving Rhames) and Benji (Simon Pegg). I like the Mission: Impossible movies because each film has a different director and thus each one has their own distinctive feel. Sure, there are a couple of constants (Cruise is in them all, they all are spy/action movies, and they all have people wearing masks - a nod to the TV show),  but going into a Mission: Impossible movie you are never quite sure what you are going to get.  Sometimes it's a silly fun spy franchise, other times it feels like nothing more than an excuse for Tom Cruise do to some sort of crazy stunt. Since the first film was released in 1996, there have been five movies, with a sixth on the way. Here's how I would rank the m
1 comment
Read more