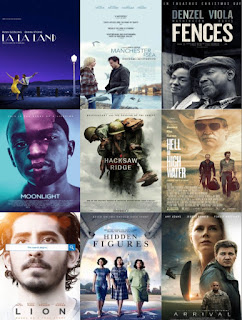 This year there is no mystery as to which movie is going to be the big winner on Oscar night, as La La Land is sure to dominate. That movie earned a record tying 14 nominations and will undoubtedly win Best Picture, Best Director, and Best Actress. The question now becomes just how many of those nominations will turn into wins. I do not think it's going to break the record for most wins (which is currently at 11 held by Ben-Hur, Titanic, and The Return of the King). Tying the record is certainly possible, but I think 10 wins sounds about right. To see a complete list of nominees, click here.

Here are my predictions with analysis on some of the major categories:

There's nothing to analyze here - La La Land is going to win. 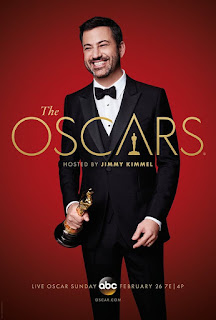 This is probably the toughest category to predict and it's down to either Denzel Washington or Casey Affleck for Manchester by the Sea. Affleck was the presumed frontrunner for most of award season until Washington beat him for the SAG Award. It's been 13 years since the SAG winner did not repeat at the Oscars, which is why I am predicting him for now.

I'm pretty confident it's going to be Stone. Her biggest competition is Isabelle Huppert, but performances in foreign language films very rarely win. Still Best Picture and Best Actress have not gone to the same movie since Million Dollar Baby and no Best Actress has won for a musical since Liza Minnelli in Cabaret.

Although he surprisingly lost the Golden Globe, Ali has won pretty much every award in existence for Moonlight. No reason to think he won't win the Oscar, especially since the Globe winner, Aaron Taylor Johnson, was not nominated by the Academy.

Another easy category to call. Everybody is talking about how it's time for Viola Davis to finally win an Oscar, even if her placement in the Supporting Actress category has been called into question by some.

The Oscars air February 26 on ABC. Let me know who you are predicting to win in the comments below!