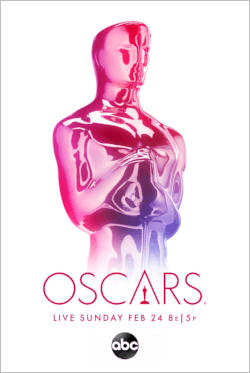 The conversation around this year's Oscars has been more focused on the show itself rather than who the winners will be. After the outcry from the film community over changes that the Academy planned to make the ceremony last only three hours, the Academy has capitulated on most of those issues. All 24 categories will be shown live on TV, last year's acting winners will return as presenters, and all nominated songs will be performed. But somehow the show will still be only three hours. [Side note: Why are the producers obsessed with getting the show to be three hours? Do they think it being long is contributing to declining ratings? Well, the ceremony hasn't clocked in at under three hours since 1972. The show's been long for a lot longer than ratings have been going down. So let the Oscars be long. They should be long - there's a lot to do!]

Another aspect of this show that has been generating more buzz than the actual nominees is the controversy over the host. Apparently, the Academy had an extremely difficult time convincing someone to take the job this year, as it is seen as a lot of risk with little to no reward. Eventually, the Academy thought they'd solve their problem by tapping Kevin Hart to host, until people pointed out that he maybe wasn't the best fit. So, there will be no host for this year's ceremony. The Oscars have been emcee-less a handful of times throughout their 91-year history, most recently in 1989. It will be interesting to see if the show will have any sort of comedic or thematic throughline without a host.

As for the awards themselves, there are a couple of places were surprises might happen, which is always exciting. I offer my predictions below in all 24 categories and break down some of the major ones. To see a complete list of nominees in each category, click here.

This category isn't as obvious as it has been in past years and there are a number of contenders. What I have been noticing in the years since the Academy has changed the way Best Picture is voted on in 2009 (they made it an instant runoff vote system that is complicated to explain so I'm not going to!), is that there are two types of Oscar years; years where the Best Picture winner claims multiple top prizes - including Best Director - and years when the Best Picture winner might win an acting or screenplay award, but not Best Director. Years when Birdman and The Shape of Water won represent the former category and years when Argo, Spotlight, and Moonlight won represent the latter. Which type will this year be? I don't know. But I suspect that it'll be the type where one movie wins a lot, and I suspect that movie will be Roma. But if it's the second type of year, then I can see Green Book being the winner. There's also a small possibility Blackkklansman will benefit from the convoluted voting process, which requires voters to rank all the nominees in this category by preference. Whether Academy members vote prefer Roma or Green Book, I can't see them not liking Blackkklansman.
Prediction: Roma

Can we take a minute to just appreciate what a great group of nominees this is? Glenn Close? Amazing. Lady Gaga? Iconic. Olivia Colman? Brilliant. Melissa McCarthy? Incredible. Close is the most-nominated living actor to have yet to win (this is her seventh try), so I think her time has finally come. It'll be a richly deserved win, and if her Golden Globes acceptance speech is any indication, it'll be one of those classic Oscar moments we all love. But if she doesn't win, for some reason,  she'll probably lose to Colman, who won the BAFTA.
Prediction: Glenn Close, The Wife

Bradley Cooper totally changed his physical appearance, lowered his voice an entire octave, and learned how to play the guitar to transform himself into Jackson Maine. Rami Malek lip-synched and wore fake teeth. Guess who the Academy is going to go for?
Prediction: Rami Malek, Bohemian Rhapsody

People love Regina King. She's a great actress and she's won Emmys for TV shows that nobody has ever heard of. But she didn't even get nominated by the SAG Awards and the BAFTA Awards, so I guess there's a chance she'll lose. But to who? If voters are really crazy about Roma, I can see Marina de Tavira winning. Wouldn't that be surprising?
Prediction: Regina King, If Beale Street Could Talk

All of the relevant precursors have gone to Mahershala Ali, so I guess he'll win. But he won only two years ago for Moonlight, so maybe voters will feel like it's too soon to reward him again? In that case, Richard E. Grant could upset. I would love to see that happen because I thought Can You Ever Forgive Me? was better than 88% of the Best Picture nominees, but it most likely won't happen.
Prediction: Mahershala Ali, Green Book

Who do you think the winners will be? Let me know in the comments below? Thanks for reading!