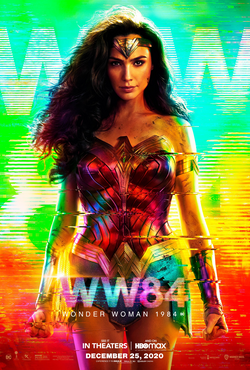 If all superhero movies were as good as Wonder Woman 1984, I'd be a fan of superhero movies.  While I did like 2017's Wonder Woman, this sequel improves on its predecessor in almost every way. 1984, which is in theaters now and also streaming on HBO Max for the next month, is just what we need in these dark final days of 2020, a bright and uplifting piece of popcorn entertainment.

With comic book movies, the more they try to outrun their silly origins, the less enjoyable they are to watch. Thankfully, 1984 wholeheartedly embraces the silliness. The plot revolves around a rock with magical properties that grant people's wishes, though at a cost. The "be careful what you wish for" theme is explored through three characters who make a wish: Diana (played once again by Gal Gadot), and the film's villains, Barbara Minerva (played by a very fun Kristen Wiig) and Maxwell Lord (played by Pedro Pascal in an outsized villainous performance).

Chris Pine also returns from the 2017 movie as Diana's love interest, Steve Trevor, despite his character's death at the end of that movie. How they bring him back is clever, and his scenes with Diana comprise the best parts of the movie. It makes up the emotional core of the film, which is actually romantic. Most superhero flicks today are devoid of romance, especially the entirely sexless Marvel movies. But 1984 treats Steve and Diana's relationship seriously, with scenes like their reunion given as much time and weight as the action scenes.

The film's '80s setting not only provides director Patty Jenkins with some fun color palettes to work with, but it also spiritually guides the film away from the mistakes of so many modern action blockbusters. 1984 feels no need to ground the action in some kind of visceral realness, nor does it attempt to connect to the larger universe of superheroes out there to set up future installments. It's standalone nature focuses the film and allows it to exist on its own silly terms.

Before pressing play on this movie, I remarked that all I needed to be happy with a Wonder Woman movie was a scene with the invisible jet and a scene where she blocks bullets with her bracelets. And I got both of them, though she, for some reason, actively avoids doing the bracelet move for much of the film. The scene where Steve and Diana fly through fireworks on the invisible plane was so perfect, I predict it will be remembered as a classic superhero movie moment, right alongside Christopher Reeve flying Margot Kidder around Metropolis and Spiderman kissing Kirsten Dunst upside down in the rain.

I don't mean to say 1984 doesn't have any problems, because it does. The last fifteen minutes or so could use some condensing, and between the two villains, it starts to feel a little overstuffed. There's enough here to fill two movies - a smaller scale one with the museum intrigue of Barbara being envious of Diana, and one where Maxwell Lord nearly drags the entire world into nuclear war. With the runtime approaching three hours, picking one villain would have probably been the way to go.

When I was a kid, I had the first season of the Lynda Carter Wonder Woman TV show on DVD (fans of that show are advised to stick around for the end credits scene of 1984). As I rarely read comic books, that show was what largely formed my perception of Wonder Woman as a character (just the first season, where she foils Nazi plots in the World War II era. I've never seen the later seasons set in the '70s). HBO Max recently added that show and I revisited a few episodes in the days before watching 1984. And while I could write a whole other article about the differences between the adaptations, 1984 distills much of what I loved about the character as a kid. She's not a hero who goes around killing every bad guy in her way, she is strong enough to know she doesn't need to do that. For Wonder Woman, truth and compassion are stronger than bullets. 1984 suggests that justice prevails when truth prevails, and I found that to be rather moving sentiment in 2020.

Wonder Woman is a hero who radiates hope and optimism, and Wonder Woman 1984 is a perfect showcase for that. And maybe next time, they'll finally allow her to change into her costume by spinning around.