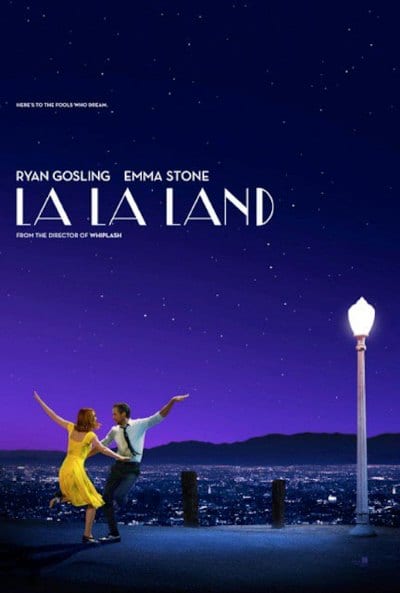 La La Land, Damien Chazelle's follow up to Whiplash, pairs Emma Stone and Ryan Gosling as two people who fall in love in Los Angeles. Despite its many flaws, La La Land makes a compelling case that the original movie musical isn't dead after all.

Stone plays Mia, a struggling actress working as a barista, and Gosling plays Sebastian, a jazz pianist who longs to open his own club. Both are unfulfilled in their creative lives, and after they fall in love, the movie becomes about what is more important: achieving their dreams or being together. It's definitely familiar territory for a movie to tread, but La La Land is so artfully crafted it feels special and unique anyway.

The musical numbers, composed by Justin Hurwitz with lyrics by Pasek and Paul, are unfortunately only sporadically placed throughout the film. Much has been said about the first two numbers, and while their ambition is appreciated, something felt missing. Perhaps it was having two ensemble numbers back-to-back, or maybe because the sound was weird and the lyrics weren't as easily understood as they should have been. Either way, the movie improves greatly when the focus shifts to Mia and Sebastian's romance, and the musical numbers after that are more intimate in scale and far more effective because of it (I'm thinking specifically of the "A Lovely Night" number).

Strangely enough, the best parts of La La Land have no singing at all. There are a couple of dreamlike dance sequences set to Hurwitz's compositions where Stone and Gosling lyrically drift about that just blew me away. Fanciful and otherworldly, these scenes are pure movie magic.

This is a relatively minor complaint, but Mia and Sebastian's goodbye scene in Griffith Park felt like it had the wrong tone. It's wistful. It matches their relationship up until that point, whereas it should be definitive, a departure from what came before. But this misstep is redeemed by the bittersweet epilogue ripped straight out of The Umbrellas of Cherbourg. Speaking of that film, Chazelle makes his influences quite clear, with nods to Demy and old Hollywood musicals like Singing' in the Rain abound.

Words cannot describe the joys of watching Emma Stone on screen.  With one of the most expressive faces in movies, Stone allows the audience to experience every emotion at the same moment Mia does. Rejection, heartache, elation, joy, we see it all in her eyes. Whereas I walked into the the theatre expecting Emma Stone to be wonderful, it was Gosling who really took me by surprise. He  delivers an incredible performance as someone whose unrelenting passion for a dying art form makes him difficult to be around. It's unlike anything I have seen from him as an actor thus far, and he proves himself to be a formidable counterpart to Stone.

Neither Stone nor Gosling has the perfect voice, but they are perfectly suited for their characters. The realistic singing voices fit in the world Chazelle has created, where singing is as much a part of life as sitting in traffic. It's like what Woody Allen was going for in Everyone Says I Love You, except here it works.

Technically, La La Land is a throwback to a time when original movie musicals existed outside of animation. But it feels fresh, contemporary, and absolutely vital for this year.

What did you think of La La Land? Leave a comment below!