Ranking the Films in the "Vacation" Series


Ranking the Films in the Vacation Series I love the Vacation movies. They are a rumination on one man's attempts to create lasting memories for his family, like the ones he remembers from his childhood. What he does not realize is that people tend to romanticize their memories, so any attempts to recreate perfect moments will only end in frustration, heartache, and probably injury. Because we know how Clark's (Chevy Chase) struggles will end, it is funny when the Griswold family's misadventures all reach the same inevitable conclusion. Over the course of five movies, the audience has gotten to know exactly what to expect from their plans, and the fun part is watching the silly, bizarre, or sometimes downright cruel snags in the road.  Here is how I would rank the five films in the series from worst to best: 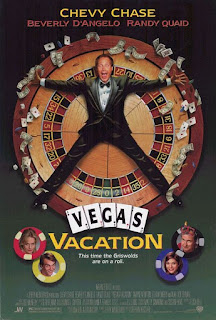 Released 8 years after its predecessor, Vegas Vacation is the first film in the series not to carry the National Lampoon branding. It is also really bad. Years of showing sanitized versions of the original three movies on TV must have led to erroneous belief that the Vacation is a family-friendly franchise. It was never meant to be, but nonetheless this installment carries a PG rating. That means the movie wants to derive its laughs from placing the dopey Griswold family in the middle of the debauchery of Las Vegas, but it can't show any of that debauchery on screen, meaning there isn't a single funny joke in the entire movie. There is the opportunity for the movie to let Clark's long-suffering wife, Ellen (played by Beverly D'Angelo) to get back at her husband for his active attempts to sleep with Christie Brinkley during the first movie, by having her become infatuated with Wayne Newton, but the flirtation remains chaste and super boring. There is also way too much of Cousin Eddie (Randy Quaid) in this movie. Cousin Eddie was never funny. Ultimately, there simply is not a reason for this movie to exist and we should go on pretending that it doesn't. This holiday classic has become the most beloved of the franchise, although it really shouldn't be. I suppose it's because of the annual showings of it at Christmas, and what's Christmas if not the time to watch bad movies and pretend they're good. I have so many problems with this movie I don't even know where to start. Why are Audrey and Rusty (here played by Juliette Lewis and Johnny Galecki) de-aged from the previous film? And why are they now insufferable? Also why can't they get along? More than just the usual bickering, Audrey seems to actively hate her brother in this movie. It makes no sense given their relationship in the previous films and it's never explained. Why does Clark hate his job so much? I had always presumed that Clark cherished his time with his family so much because it was an escape from his boring job. But the scenes of him at work see him wearing fun ties and he appears to have toys on his desk. It does not seem that bad aside from his boss not giving him a bonus. And it is really hard to sympathize with Clark not having the money to put in a pool when the movie goes out of its way to show the effect of living in abject poverty is having on Cousin Eddie's kids. Christmas is funnier than Vegas, but it's still not that funny. The Griswolds' lack of sophistication is a joke made many, many times in the first two films, so why are the neighbor characters (played by Julia Louis-Dreyfus and Nicholas Guest) added just to make the same joke again? There are also a couple of visual references to other movies (like The Texas Chainsaw Massacre) that are too randomly placed to be funny. And what is the purpose of hiring terrific actors like Doris Roberts, Dianne Ladd, and E.G. Marshall to play Clark and Ellen's parents only to give them next to nothing to do? Aunt Bethany (Mae Questel) is the only relative that made me laugh. There is one scene that I really like, the scene where Clark watches old home movies. It's a lovely moment that encapsulates the entire themes of the franchise, and explains Clark's motivations for doing what he does. But of course it's sandwiched between gags about Clark getting trapped in the attic.

We have reached the point in the ranking where we transition from movies I don't really like to movies that I do really like. When the reboot of the series came out in the summer of 2015 most critics hated it. To an extent, I can see why. It's poorly edited and there are a lot of really dumb jokes. But most of the criticism was that Vacation was "mean-spirited", especially compared to the original. This makes no sense. Perhaps the constant TV airings have made people forget that the original is an R rated movie. It's foul-mouthed, raunchy, and at times mean-spirited. If anything the reboot is a welcome return to form for the franchise, after two toothless sequels that lazily tried to capitalize on the family audience. I know the jokes are cheap, but they are also really, really funny. It also represents an important thematic point for the series. This time, Rusty (played here by Ed Helms) is trying to create fond memories for his family, inspired by the vacations of his childhood. All he remembers is having fun at Walley World, not getting lost in the desert or his father murdering a dog. To see the kid from the original grow up to be just like Clark is confirmation that what Clark has been after this entire time doesn't really exist. We can chase them all we want, but perfect moments only exist in our memory.

I know this will be controversial but I decided to place the original film in the number two slot because, for me, the hit-to-miss ratio for the gags is slightly lower for this movie than my number one choice. Written by the great John Hughes and directed the great Harold Ramis, this is the one that started it all. I talked about it a lot in relation to the other movies, so there isn't that much more to say, other than the movie works because the set up is so simple. There's a throwaway style to the jokes that make it more focused than most road trip movies. It also works in large part due to the performance of Chevy Chase. The audience wants to see Clark succeed just as much as we wants to see him fail so we can laugh at his failure. It also features the only tolerable appearance of Cousin Eddie.

The second installment of the franchise was directed Amy Heckerling, who has so many hits on her resumé that it's a tragedy she is not held in the same regard as someone like John Hughes. This time the comedy comes from the culture clash between the typical American tourists, the Griswolds (spelled 'Griswald' in this movie, for some reason) and the European countries they visit. There are a couple of bits that don't work, but this is the funniest film of the series, and it has my favorite incarnations of Audrey and Rusty, played here by Dana Hill and Jason Lively. It's remarkable how long some of the gags play out for. A lesser movie would have cut them short and try to shoehorn a heartwarming message in at the end. But Heckerling and Hughes are after something different: a big comedy with a mean streak and an endless parade of gags. It seems like every R rated comedy since The Hangover has been trying to achieve the same thing, but almost none have. Perhaps they should look the approach  of European Vacation and figure out why it works so well. Or maybe they should just hire Amy Heckerling. 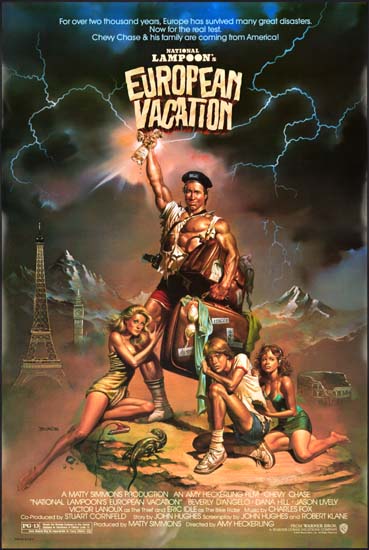 How would YOU rank the Vacation films? Put your rankings in the comments below!