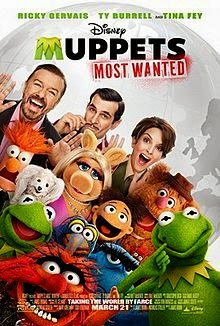 For my first post, I'll be reviewing "Muppets Most Wanted". Let me start off by saying that I am a huge Muppet fan, and have been since I was very young.  So, needless to say, I had very high expectations for their eight feature film. And I am happy to say, I was not disappointed. "Most Wanted" picks up after the events of the 2011 reboot, "The Muppets", and follows the gang as they embark on a World Tour. Oh, and Kermit is replaced by his evil doppelgänger, Constantine, but that's a very minor subplot and doesn't really go anywhere.

"The Muppets" was a nostalgia-filled reintroduction to these characters, who hadn't been on the big screen since 1999's "Muppet From Space". The reboot hit all the right notes to get people to care about these characters again. And it worked perfectly for that movie. But now Muppets fans, like myself, wanted the next one to be a classic Muppet adventure, and not as heavy on the heart and sentiment. And that's exactly what we got. From the moment "Most Wanted" begins, the audience is reassured that The Muppets are back again, and told to just enjoy the sequel. In fact there's even a musical number ("We're Doing a Sequel") pointing out the fact that sequels typically are not as good as their predecessors. The number is big, exciting, cameo-filled, and introduces us to the story in a way that reminded me of "Hey, a Movie!", from "The Great Muppet Caper". We are then introduced to Ricky Gervais as Muppet tour manager/Constantine's Number Two, Dominic Badguy. Gervais does a wonderful job as Number Two to Constantine's Number One. And that brings me to the main villain of the movie, Constantine. Don't let the fact that he looks just like Kermit fool you. Constantine is one of the most threatening villains the franchise has ever had. Plus he's the only one who is a Muppet himself. His Russian accent, and him trying to act like Kermit to fool the rest of the Muppets into thinking he's Kermit provide some of the biggest laughs of the film. This is due largely to Constantine's performer, Matt Vogel. Vogel is terrific, and I really do hope Constantine pops up again somewhere down the line.

Aside the Gervais, the other main human roles are filled by Tina Fey and Ty Burrell. Fey plays Nadya, the warden at the Russian gulag Kermit is sent to, and is excellent in the role. I was initially worried about Kermit spending so much of the film away from his friends, but I have to say, the gulag scenes are some of my favorite. In addition to the dynamic between Kermit and Fey, we get a whole bunch of celebrity cameos as the inmates, including Ray Liotta, Danny Trejo, and more. Burrell is the one who surprised me the most, though. I never found him to be particularly funny on "Modern Family", but here, as Interpol agent Jean-Pierre Napoleon, he is a delight to watch. He's paired with Sam Eagle, who has somehow become a CIA agent, and the two practicality steal the show, as they attempt to solve a series of crimes that take place at every spot of the Muppet's tour. But at no point in the film does it seem like the human characters are more prominent than the Muppets. I know this was a major complaint among Muppet fans about the last one(For me, I like Amy Adams so much that I really didn't mind).The humans here are in supporting roles, there to compliment the Muppets, not to take away from them.

The plot isn't terrific, but it's a Muppet movie so that really doesn't matter. There are parts that are really predictable, and yet there are parts that are completely unexpected, so it balances out. But the story never gets in the way of Muppet hilarity, and the World Tour aspect allows for a lot of fun with infusing different cultures into The Muppet Show format. I love the fact that a lot of characters that were forced to take a back seat last time were able to shine here. Okay maybe not 'shine', but a lot of them at least got a line. I'm specifically thinking of Rizzo, (who hilariously makes fun of the fact that he and Robin weren't in the previous movie), but also Pepe, Link Hogthrob, and  even ones who only appear in the background like Mildred Huxtetter and Annie Sue. But that does mean some of the characters that were big last time got cut down in this one. Unfortunately, Gonzo and Rolwf didn't have much to do at all. Pleasantly, Walter still had a big role. Not as big as the last time, but he certainly plays an important part in the story. As a side note, I really enjoyed the pairing of Walter and Fozzie, they play off each other really well.

With all that being said, this is really Miss Piggy's movie. She has the most clearly defined character arc, and Eric Jacobson does some of his best work, in my opinion, in this film. The film explores that relationship between Piggy and Kermit in a way "The Muppets" only briefly touched upon. Piggy begins the film as demanding and just expects the Frog to go along with whatever she says. (And who can blame her, really?)But, after getting everything she could every dream of from Constantine posing as Kermit, Piggy realizes that it just doesn't feel right, and comes to appreciate Kermit for who he is and the important role he plays in all of their lives. But, still, nobody besides Animal noticed Kermit was replaced by a frog with a Russian accent?

The music is the film, with original songs written by Bret Mckenzie (who won as Oscar for writing "Man of Muppet" for the last one), is outstanding. "Most Wanted" is definitely more of a strict musical than "The Muppets" was. The music and lyrics are smart and catchy and will have you singing them for days after you've seen the movie. Aside from the opening number, standouts include "I'll Get You What You Want (Cockatoo in Malibu)", preformed by Constantine, and "Something So Right", preformed by Piggy and Celine Dion. Somewhere in this odd bunch of songs, there has to be the next Oscar winner.

Now, let's talk of the ending. If you don't want the ending spoiled, stop reading at this point. Gervais being revealed as 'The Lemur', was so obvious that they couldn't have been trying to pretend he wasn't. But I don't have a problem with that, I do, however, with the Lemur suit he wears in the last scene. Am I missing the joke here? Also the structuring feels a bit off. It would have made much more sense for Kermit to reconcile with Tina Fey and everyone at the gulag, before he went to find Piggy, and then have the movie end with Kermit and Piggy actually getting married. To me, that would have made a better ending, but perhaps they didn't want to do that because it's how "The Muppets Take Manhattan" ended. But they never even reference that wedding, which just makes it all the more confusing. Even though I love the fact that they used "Together Again (Again!)" to close out the film, the green screen effect was pretty terrible and distracting.

As with any Muppet movie, there are some things I'm going to complain about, but overall, this zany, absurd caper flick fits right in with The Muppet adventures of the '70s and' 80s.  Director James Bobin, who co-wrote with Nicholas Stoller, as well as the Muppet performers have all outdone themselves with this one. I can't really bash Disney for not marketing the film, the commercials were really great, and the Muppets have been everywhere lately, but I can bash them for the lame poster and just plain bizarre March release date. Even though this film isn't going to be anywhere near as finically successful as the last one, I really hope it doesn't get a reputation for killing the momentum.