Sofia Coppola's "The Beguiled" is a Tense and Artful Tale of Vengeful Southern Women: Review 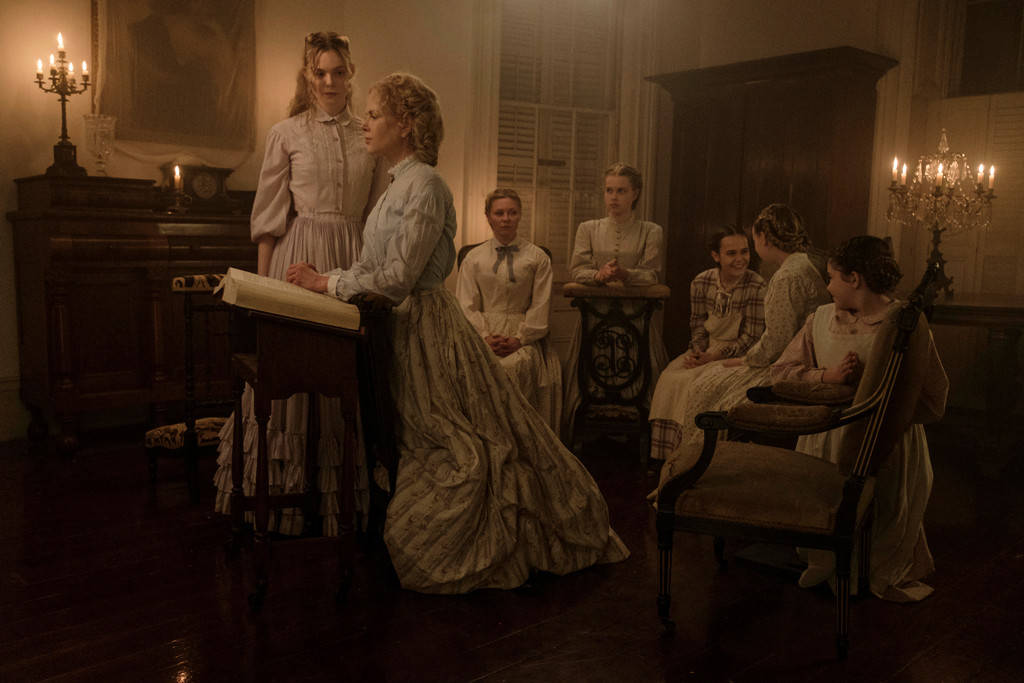 In 1971, Don Siegel directed two movies, both of which starred Clint Eastwood. One would become a franchise-starting classic; a gritty and violent thriller about a cop who makes his own rules. The other was an oddity in both people's filmographies, an unsettling drama about a Union soldier who attempts to seduce, and then is terrorized by, a group of women at a Southern boarding school, that failed to make any sort of impact at the box office. 46 years later, one of those films has been remade, and it's not Dirty Harry. Siegel's The Beguiled is a strange movie. There are interesting visuals, the camera swoops and swerves and the dim lighting is absolutely haunting. But the film introduces more threads than it has time to invest in, and while it is clear the audience is not supposed to root for the Eastwood character, it's hard to root for the women either, so the audience is left wondering what it is we are supposed to take away from the story. Enter Sofia Coppola.

Coppola, the director of atmospheric tone poems and ethereal odes to ennui, seems a natural fit to direct this tale of isolated women. She's shortened the action, tightened its focus, and aligned our sympathies strictly with the female characters. The story remains intact: a union solider, John McBurney (Colin Farrell), is injured during the Civil War and taken in by the women at Miss Farnsworth's Seminary for Young Ladies to recover. Sexual tensions and intense rivalries boil over between McBurney, the headmistress (Nicole Kidman), the teacher (Kirsten Dunst), and a student (Elle Fanning). Unlike most of Coppola's previous projects, The Beguiled has a plot, with a defined beginning, middle, and end. You occasionally get the sense that Coppola had to remind herself to move on with the plot, resisting the urge to linger in the lush settings that predominated her earlier films. Here the mood is  in service of the story, not the other way around, and Coppola shows a surprising adeptness at creating tension and suspense.


The cast comprises Coppola's finest ensemble yet. Kidman plays Miss Farnsworth with a steely resolve that quivers in the tender moments she lets her long-supressed desires be known. Fanning is clearly having a blast as the teenage Alicia, who is the most blatant about her attraction to McBurney.  Colin Farrell doesn't have the unimpeachable action hero image that Clint Eastwood had to contend with when he played the wily and opportunistic McBurney. As a result, it's easier for the audience to accept McBurney as the antagonist right out of the gate. We can see the wheels turning in Farrell's McBurney's mind as he plots his manipulations. Eastwood's McBurney was a smoother operator. We wanted to believe him when he softly says he has fallen in love with Edwina, but in the new version that same profession of love elicits laughter.

As terrific as the rest of the cast is, it is no question that Coppola's frequent collaborator Kirsten Dunst is the standout. Dunst plays Edwina, the teacher at Miss Farnsworth's, who longs to be elsewhere and begins to think McBurney is her ticket out. Wistfully staring out the window, Edwina feels trapped by her circumstances, and in that way, she is the character most similar to the ones in Coppola's other films (especially Dunst's previous roles, Lux Lisbon and Marie Antoinette). Elizabeth Hartman, who played Edwina in the '71 version, had wonderfully expressive eyes that screamed sadness and loneliness. Dunst's performance is more restrained by comparison,  more confined than outright depressed. But the isolation comes across just as well, with one glimpse of her melancholic gaze. It's a truly commendable performance, one that if the Oscars recognized subtle performances more than once a decade would certainly garner awards attention.

Also worthy of praise are Stacey Battat's splendid period costumes and Philippe Le Sourd's stunning cinematography. The (awesome) French rock band Phoenix provides a great, Monteverdi-inspired score, but Coppola wisely does not overly rely on music to create suspense. There are a few dramatic beats towards the end of the film that play out better in Siegel's film. But what Coppola lacks in conventional dramatic technique, she more than makes up for creating a rich atmosphere, which turns out to be remarkably conducive to the suspense genre. There is no better exemplification of Coppola's skill than the two parallel scenes set at the dinner table. The first one, which occurs about halfway through the film, is a slyly hilarious take on the effects of a man on women. The second one, at the end of the film, is a chillingly tense take on the effects of women on a man.

Coppola uses a soft palette of whites and pale pinks to portray the Miss Farnsworth school as a beam of femininity and civilization is the midst of a gruesome war. Yes, the women have been affected greatly by the war (as cannons boom in the distance, they are literally trapped), but at the start of the film their gates are untouched by the brutality and the bloodshed that surrounds them. McBurney's arrival changes that. Bloodied and wild, he represents the worst of man's intentions. The film's suggestion on how best for women to combat those intentions is a delightfully macabre treat.

What did you think of The Beguiled? Where would you rank it among the rest of Coppola's oeuvre? Let me know in the comments below!