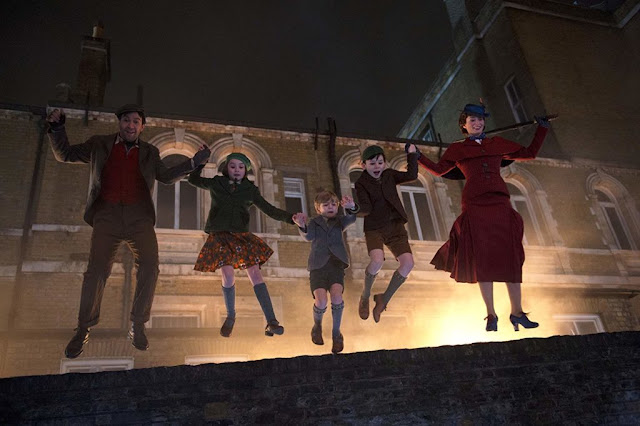 Action movies aren't really my thing. But I do like the Mission: Impossible franchise, and despite the fourth and fifth installment's veer toward the generic, the sixth one has emerged as a serious contender for the best M:I movie yet. The action sequences are genuinely, the script is smart, and the direction feels alive. Tom Cruise, of course, anchors the film, but it also has good moments for Ving Rhames, Rebecca Ferguson, Henry Cavill, Angela Basset, and soon-to-be-major-movie-star Vanessa Kirby.

The first of two Mary Poppins stories featured on this list, Tully has direction by Jason Reitman, a script by Diablo Cody, and a star in Charlize Theron (the three of whom proved to be excellent collaborators with 2011's Young Adult). A sober examination of motherhood, Tully is both charming and a little mean. But really it's a revealing fable about the passage of time.

Clint Eastwood directed two movies in 2018. The first, The 15:17 to Paris, was a bizarre filmmaking exercise that boasted one of the worst screenplays in recent memory. The second, The Mule, proves that Eastwood is still a great director when working with good material. The Mule's screenplay is by Nick Schenk, who also penned Gran Torino. It's the story of 90-year-old horticulturist who becomes a drug mule. The pace is refreshingly relaxed, as the themes of work vs. family come to the forefront. Eastwood stars as the titular mule and the movie also features Bradley Cooper, Dianne Wiest, and Andy Garcia.

Ben is Back stars Lucas Hedges (son of the movie's writer-director Peter Hedges) as Ben, a young man who unexpectedly returns home from rehab on Christmas Eve. Julia Roberts plays his mother, who is determined to keep her son from relapsing. The story only spans a 24-hour period, but it touches on many facets of the opioid epidemic. It addresses the issue in a way that is bracing and unsentimental. Although it contains probably the best performance of Hedges' young career, the movie belongs to Roberts, as it is really about her mission. It's been a few years since she has had a movie role this good, but Roberts proves to be up to the task, deftly revealing the layered calculations of her character.

Did we need a sequel to Mary Poppins? Absolutely not. But if one had to be made, I'm glad it's this. Mary Poppins Returns is an exquisitely-crafted film that has, at its core, deep affection for the not just the original film but also movie musicals of that era in general. Perhaps Rob Marshall's best film since Chicago, it contains musical sequences that are nothing short of thrilling. The songs, by Marc Shaiman and Scott Whittman, are delights, with some lyrical wordplay that is surprisingly sophisticated for a children's movie. Emily Blunt puts her own spin on the character of Mary Poppins and Ben Whishaw is very good as a grieving Michael Banks.

If you had told me last year that I'd be defending First Man, I would have laughed in your face. When a biopic about Neil Armstrong was announced to be Damien Chazelle's next project, I rolled my eyes. I couldn't think of a less interesting follow-up to one of the most exciting original musicals in decades. I've seen far too many nice but conventional movies about great American heroes. I wasn't at all looking forward to another one. Critics were merely polite and it tanked at the box office, which all added to my surprise when I finally saw the film and realized that it's kind of astonishing. Really an interior character study about grief, First Man has so much more on its mind than most movies about people going into space. The shaky, handheld-like camera work of the domestic scenes are initially puzzling, until the brilliant payoff when all that came before contrasts with the utter stillness of the surface of the moon when Armstrong finally makes it there. And although all the scenes involving space travel are long and boring, the rest of the film is so well made, it almost doesn't matter. Ryan Gosling and Claire Foy give two of the best performances of the year as Armstrong and his wife Janet. Forget the moon landing, the tensest and most dramatic moment in the film is the Armstrong family sitting around the dinner table.

4. Can You Ever Forgive Me?

It's a blast watching this darkly comedic true-life tale about literary forger Lee Israel. Although the movie somewhat delves into very heavy topics, it's never not enjoyable, thanks largely to the sharp screenplay by Nicole Holofcener and Jeff Whitty. Melissa McCarthy plays Israel as a woman who knows she's an extremely talented writer but who is forced to find a way to live in a world that doesn't value her talent. There's a melancholic strain to her performance that adds a level of depth that she rarely gets a chance to display in her films. She and Richard E. Grant make for the year's best on-screen duo.

One of the biggest surprises of 2018 was Leave No Trace, a beautiful movie about a father and daughter living on the margins of society. The relationship between the characters played by Ben Foster and Thomasin McKenzie is complex, as is the film's treatment of serious issues like homelessness and PTSD. Director Debra Granik has created one of the most thoughtful and rich films of the year.

I have already written much about A Star is Born, so I'll add nothing here except to say that what Bradley Cooper accomplished with this movie is something we'll all be talking about for a very long time.

Much more than just the sad horse movie the trailers advertised, Lean on Pete is an emotionally devastating film. It’s a coming-of-age story that finds the human drama in sorting out the world around you, which takes the form of an odyssey through the Pacific Northwest. Andrew Haigh has made a deeply empathetic film that has stuck with me more than any other I saw this year.

What was your favorite movie of the year? Let me know in the comments below! Thanks for reading!